Well even though I have been under the weather and still got the sniffles...I wasn't sick enough.... Soooo many people have called off from work that I got knighted into working a double shift.  I am now at home taking my "break" blogging real quick.

I mentioned a while ago that I was afraid I was going to have to find a secondary route to get to work because my road runs along the Great Miami River... well sure enough, it flooded over the road.  It is deep enough to swallow a small car and still want more so I had to re-route.  I had an awesome interview today for my next Where You Live story about a local man who has an interesting life.  He served in the military, wrote quite a few books, and despite being "almost 77," as his profile says, he has more than a handful of blogs and a strong following....his name Abraham Lincoln. For real.  Third Cousin once removed from President Lincoln.  Actually it turns out that we live in a small world, he graduated from the same high school as myself and he even painted two HUGE paintings that were in the old Arcanum High School building.  I remember sitting on the steps of the entrance during drama club talking with others about how it was so funny that someone named Abe Lincoln painted those....who woulda thought?!?!  He is also an avid photographer and even grabbed a picture of me working, yes working.  Thanks Abe. (for the photo and showing my receding hair line) 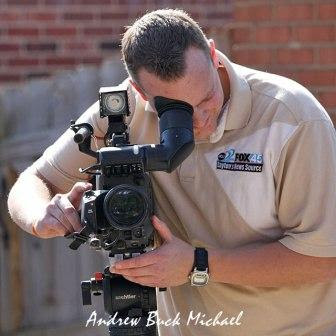 Well I guess I better get off here, put Buckeye back to bed and head back into work.... but its so nice... too bad I can't call off....hahaha....I am the only photographer working tonight because someone else has to edit the video for the news shows.  At least I only have to work a couple of hours tomorrow and then get a three day weekend for working the double...and I couldn't have forecasted better weather for my "weekend."  Have a good one!