Evan and I recorded a podcast (kinda)

View on Vocaroo >>
He loves my microphone that I use to do my weather radio hits on WCOL and WTVN.  So I figured I would record something with him. 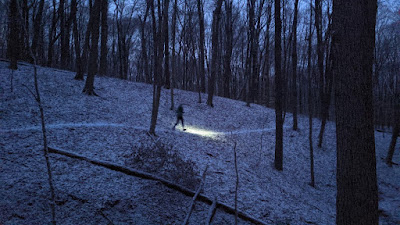 Hope everyone is doing well.  I went down to Great Seal State Park and ran 20 miles in the snow and sunshine last weekend with Mike.  It was a great day on the trails. 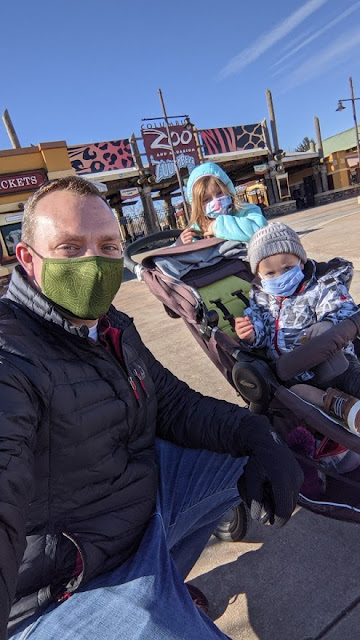 We had a brief "warm-up" last week and I took the kids to the zoo and we had a lot of fun. 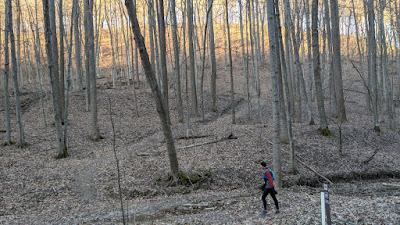 This most recent weekend I did another 20 miles at Tar Hollow State Park with Mike again.  It was 17° when we started and it felt slightly warmer in the sun so we eagerly climbed this 400 foot hill to get to the ridge and run in the sun. That was the last of the sun we have had and we will get back into more sun tomorrow. 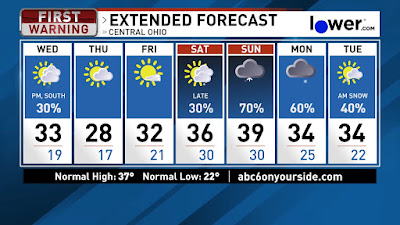 Good Wednesday morning! We are back to the cold temps! We warmed up to 44 yesterday, which helped melt any residual ice from the weekend and we may see new icy spots this morning. A few flurries to start the day with winds coming off of Lake Erie, out of the north. Mostly cloudy with a high of 33 today. A quick disturbance will be swinging through Southern Illinois, Southern Indiana, and Kentucky this evening and it is expected to barely clip Southern Ohio. Snow will stay to the south with accumulations up to 1" possible in Southern Ohio. Tomorrow we will be even colder with the clouds starting to clear overnight, after the snow, and we dip to around 20 and a high of 28 tomorrow with a mix of sun & clouds. More sun Friday with a high of 32.

Our next weather maker arrives this weekend. Here is how things look right now... We will see increasing clouds on Saturday with a high of 36. Snow moves in Saturday night and we will see snow showers through Sunday morning. As we warm Sunday into the mid-upper 30s then the Southern half of Ohio will switch to rain and Northern Ohio stays light snow. As it gets colder Sunday night we transition back over to light snow heading into Monday with highs back in the lower 30s. Areas that stay all snow could see at least a few inches of snow, but rain areas will see significantly less. Stay tuned as we get closer and get a better handle on accumulation possibilities. Have a good one!

Enjoy the mild temps while they last! 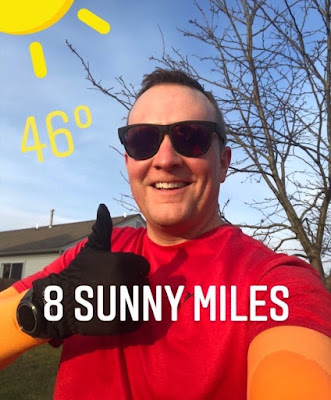 Sunshine and temps in the 40s in January, in Ohio?!?!  Doesn't happen often!  I went out for an 8 mile run yesterday to enjoy it as much as possible.  We will be in the mid 40s again today with morning sun then more afternoon clouds. 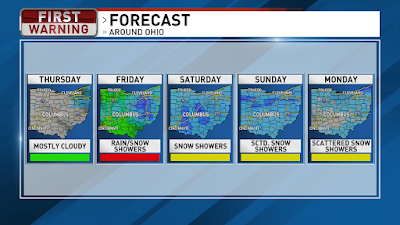 Then tomorrow morning rain moves in and then some spotty snow showers for the weekend with highs back in the mid 30s. 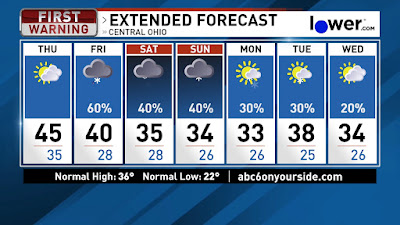 So, we are on tap for one more mild day... enjoy it! We have some rain and snow showing up on the radar to the north this morning, but so far no reports of this reaching the ground. A few heavier returns on the radar may have some light rain/snow reaching the surface, but generally a dry morning for most of Central Ohio with clouds breaking up over the coming hours for partly cloudy skies early today and temps in the lower 30s. We will warm to around 45 this afternoon and becoming cloudy again with a brisk breeze out of the south. Cloudy tonight with overnight lows in the mid 30s. Rain will move in from the west early tomorrow morning and we will likely have scattered light rain for the early morning commute and a few colder pockets could have a rain/snow mix. This first band of rain and mix will move east through the morning and by midday and early afternoon we could see some sunshine breaking through the clouds. Clouds will fill back in during the afternoon and evening as an area of low pressure moves closer and parks over the region for the weekend. The weekend will bring flurries and light snow showers from time to time with high temps in the mid to low 30s and overnight lows in the 20s. We could see some pockets of snow showers with generally less than an inch of snow per day, but a few days of that could leave some pockets with light accumulations. This pattern sticks around into early next week as well, so be mindful for icy conditions on untreated surfaces. As we head into next week the snow looks to get lighter and lighter. Have a good one!

Running into 2021 with a different goal. 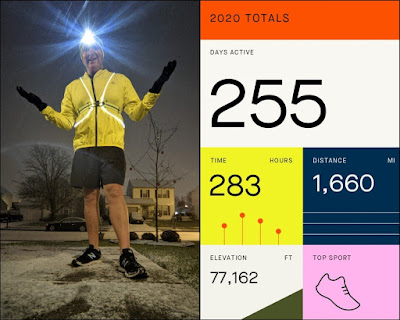 My final run of 2020 was a night run and pushed me up to 1,600 miles for the year.  I also got 77k feet of vertical gain in elevation. My goal for 2021 will be to reach 100k. This is a tall feat for Central Ohio where it is so flat. That means finding more hills on trails. This ultimately means less wear and tear as well from running on pavement. I didn't set a mileage goal because, as 2020 taught us, some things are out of our control and if I get an injury then it is not worth overloading other months go get to that running mileage goal. I can hike hills without running and I can still reach that climbing goal. (Running is faster though 😉) 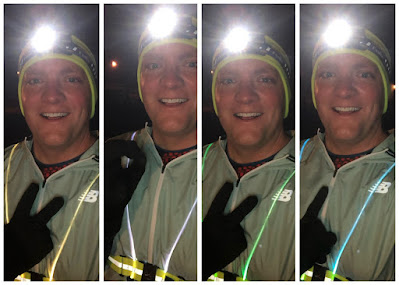 My wife woke me up just before midnight to ring in the new year with her and instead of going back to bed for 30 minutes, before work, I ran in the new year.  One of our neighbors was still shooting off fireworks. Glad I was running toward the fireworks at first because if I was running away and heard the firework then I may have tripped. HAHA. The best part is that this run ended my running streak.  It was my fifth year doing the Runner's World Run Streak.  It goes from Thanksgiving to New Year's day and you just have to run, or walk, 1 mile a day. This was my fifth year doing it and it is so easy to throw in the towel during the holidays, but this keeps the motor going. So I did this run early on Friday then no running for Saturday. Rest day! 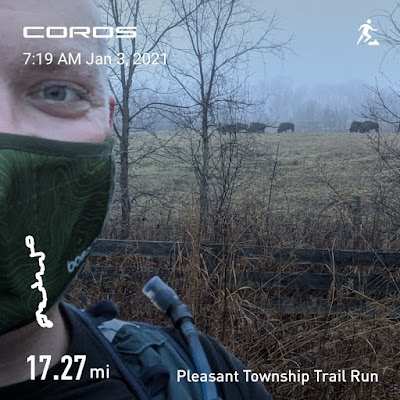 The rest day was also nice to rest up before my weekend long run on Sunday morning.  Foggy, chilly, and perfect running weather! I got to see some bison while running at Battelle Darby Creek Metro Park.  Metro Parks requires masks while at the park, but I only passed about 7 people for the 3 hours I was there. I did take off the mask from time to time when I was way out in the open away from anyone.  BOCO Gear had a clearance and they make some performance masks that actually are not that uncomfortable to wear while running at an easy pace.  I did need to take it off after trying to blast up some of the Strava segments. 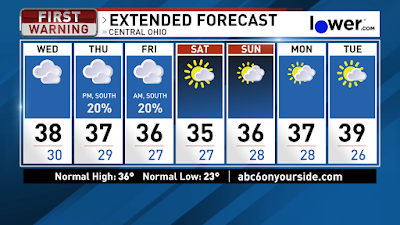 We are staying cloudy and chilly for most of the 7-day forecast. However, if you want to look at it positively: temps are staying near normal and roads are staying dry. Plus, we are gaining 1 minute of daylight each day! Let's dive into the details... Cloudy today with a few flurries and highs in the upper 30s. Staying cloud tonight with low temps around 30, so frost possible. Cloudy again on Thursday with maybe a few breaks in the clouds. We will be watching a system pass by to our south late Thursday into early Friday and Southern Ohio has a slight chance to see some light snow showers. Most of Ohio will be staying dry. Cloudy again on Friday and a few more breaks in the clouds with highs in the mid 30s. Partly cloudy on Saturday and mid 30s again. A few more clouds, mostly cloudy, for Sunday and Monday with temps in the mid-upper 30s. Partly cloudy on Tuesday with temps nearing 40. So yes, we stay in this quiet, chilly, cloudy, dry pattern for the next 7 days, but enjoy it! The long-term forecast models are indicating the polar jet stream shift and bring more active weather back to our region. That means some colder air later this month along with some snow returning by mid-late January. Have a good one!

Posted by Andrew Buck Michael at 5:26 AM No comments: