Celebrating a decade of marriage 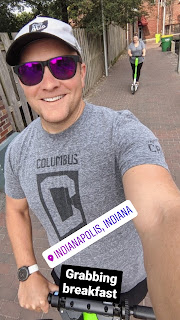 Dawn and I spent the weekend in Indianapolis celebrating our 10th wedding anniversary. 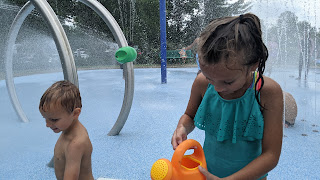 Before leaving, I did take the kids to explore the Powell water park. Summer said it was one of her favorites, despite it being a little smaller in size. The kids had a blast and that is all that mattered. It was also a very hot day so it was pretty crowded. 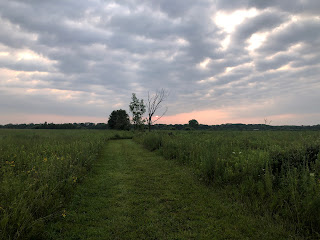 I worked Sunday for Phil so I was off Friday morning.  I did a 20 miles run at Prairie Oaks Metro Park.  I ran every trail there and just barely caught the sun popping between the clouds. I only saw a handful of people out there.  Then it was time for a shower and off to Indy.  Our kids stayed at home with grammy. 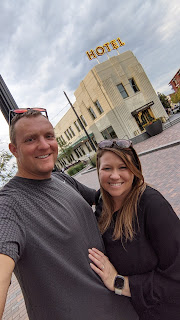 We just lived it up and tried being a couple young kids in love. We had a blast, but also relaxed and got as much sleep as we could. We stayed at Bottleworks Hotel and totally recommend it! 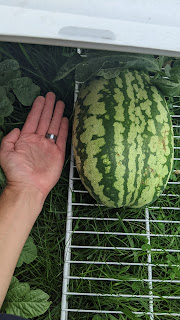 I may have mentioned it a while ago, but a meteorologist in Wisconsin, Mark Holley, sent me a bunch of seeds from his giant watermelon last year. I split the seeds with Ross Caruso and we are trying to see who can grow the biggest watermelon, here in Columbus. So I will do some updates on mine, but here it is on the rack to keep it elevated from the bug and wet ground. I need more rain, but looking pretty dry again for most of the upcoming week. 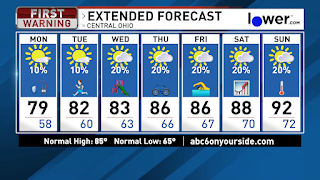 Good Monday morning! We are starting the week with mild temps a little below normal, but we will warm up later this week and get more humid as well. So enjoy today with highs in the upper 70s and mostly sunny skies. The chance of rain is very low to start the week and then we get a few spotty pop-up showers or storms later this week with the warmer temps and higher humidity. A lot of the area will be dry most of the week ahead, but be prepared for the isolated rain developing, mainly for the afternoons and early evening. Mostly sunny again Tuesday with a few spotty showers trying to work their way into Southern Ohio. More spotty pop-ups later this week possible for Central Ohio. By the end of the week we will be humid and then muggy for the weekend as temps climb back to around 90. Great week to get in some pool time! Have a good one!