So apparently my last post from a few days ago didn't actually post... so here goes again... 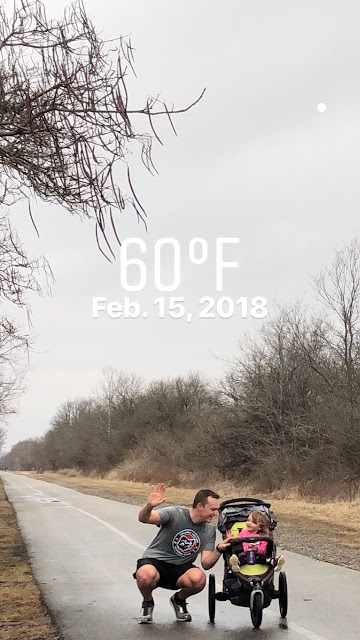 The rare warm February weather has been GREAT!  Summer and I have been out for runs on the trail and around the neighborhood. 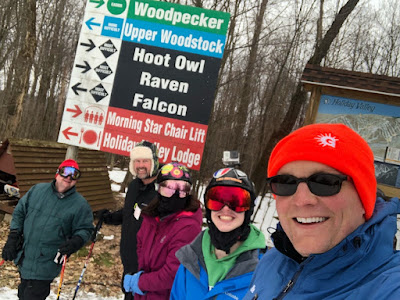 The downside has been the melting at the skiing destinations.  Dawn's boss needed to go to Pittsburgh to pick up a vehicle.  He was going to tow it back, but decided to make it a fun trip and asked if I wanted to join and go skiing before coming back.  The group's experience is WAY better than my experience.  Either way, we had a fun trip visiting Holiday Valley in New York. 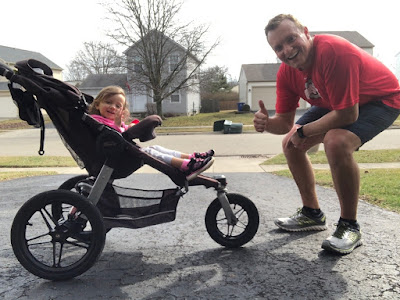 Yea... Summer and I got to spend a lot of time together outside lately. 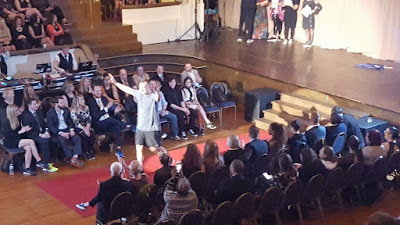 On Friday I was asked to be a model for a charity fashion show to raise money for Girls on the Run at their Sneaker Soiree. 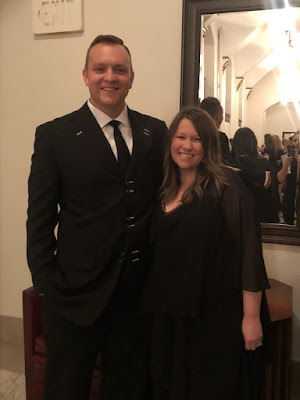 So I dressed up for the start of the event, wearing my running shoes, then changed into my fashion clothes. Here is Dawn and me. We had a lot of fun.

The warm weather has also brought a lot of rain and made running fun. No running through the moving water, but this part of the trail was in between two wetlands and not moving.  GREAT way to wash off all the mud on my trail shoes. 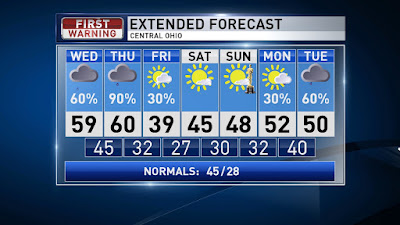 Grab the rain gear! River levels on their way below flood stage and should stay there with only light rain on the way for today. Today we are starting out a little milder. Spotty midday rain will become a little more widespread this afternoon and evening with scattered rain showers. Scattered rain will continue overnight and early Thursday. The cold front is looking to swing through a little earlier. This could trigger a few storms in the afternoon before the cold front swings through around the evening commute and temps will fall quickly late Thursday as winds pick up. With the cold front coming through earlier, a wintry mix is expected Thursday night with little to now snow accumulation. Most of the flurries will be out by daybreak Friday then colder and slowly clearing. Cooler and mostly sunny for the weekend then another round of rain returns later Monday into Tuesday.

Snow is back, but not for long!

The past few weeks have been a tease of spring.  We warm up and melt the snow... then it returns.  I have to admit... I have been running in the cold snow.  Slushy snow, not so much. 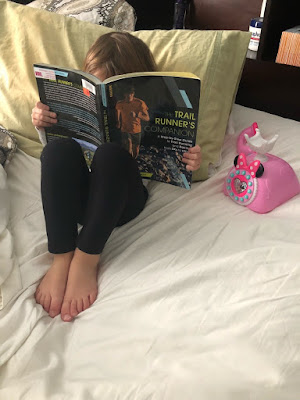 I signed up for a trail marathon in June and Summer has been studying with me on learning more about trail running techniques. 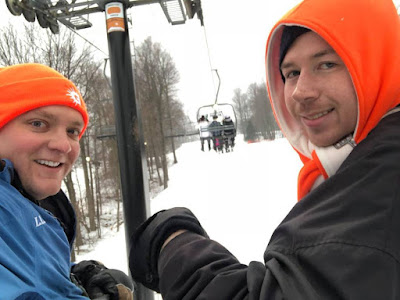 Back to snow... before it all melted I wanted to do some skiing.  I asked Dawn's brother if he wanted to join me and we hit the slopes. 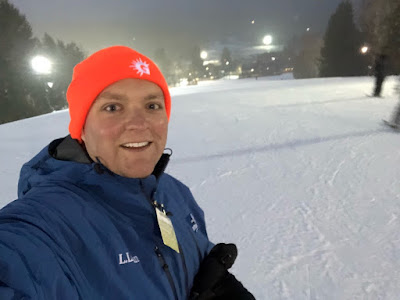 This was the final photo of the day.  My muscles were starting to get tired and I was getting a little sloppy with my cuts.  The freezing rain glazed the surface and hills that were not used as much were very icy.  When I hit the bottom of this hill I was going 32 mph and I couldn't get my skis to cut into the ice to slow down so I went careening down the hill.  Fun times! Nothing broken. 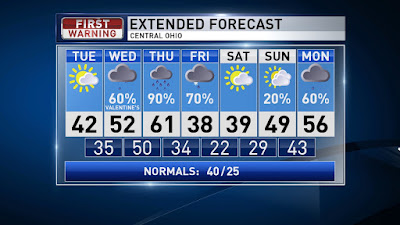 Warmer temps on the way! Today we will start out with sun then more clouds by the afternoon with temps climbing into the lower 40s. Cloudy & chilly tonight then rain starts working in later tomorrow. The rain for Wednesday will be scattered and light and mainly later in the day with temps reaching the lower 50s. Warmer on Thursday with more rain showers on and off through the day. Heavier rain expected later Thursday into early Friday morning as colder air races back in for the end of the week and start of the weekend. A few snowflakes may mix in, on the back side of the rain, early Friday, but little to no accumulation is expected at this time. Fairly dry weekend with chilly temps Saturday and a little milder on Sunday.

The long term forecast models do not have any snow for the next couple weeks. We may go the rest of the month without any big snows.  BUT... March is when we historically can have big record snows.  So we are in the clear for a while, but we don't have the all-clear just yet. Have a good one!

Running updated and more snow on the way 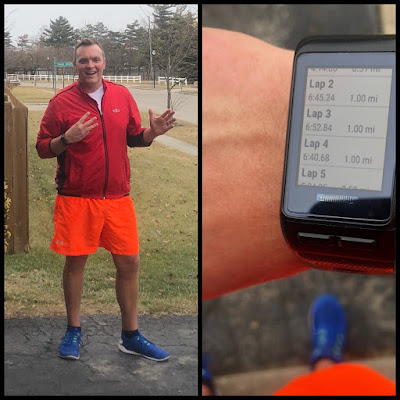 Running has been going VERY well lately.  I had speed work on Thursday, meaning faster pace for a set distance, and ran 3 miles the fastest I have gone since high school.  So things are going very well. 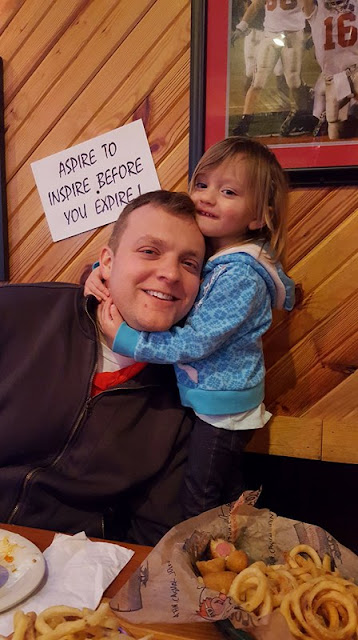 This weekend was great to hang out at home and around Columbus.  We went out to Rooster's on Saturday and we had a blast. 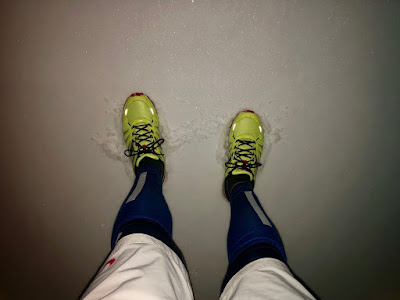 We had more snow overnight and the snow that melted yesterday turned to ice underneath.  Which gave me a great chance to try out the tread on new trail running shoes I found out super clearance. A little snug, but they gripped the ice well. 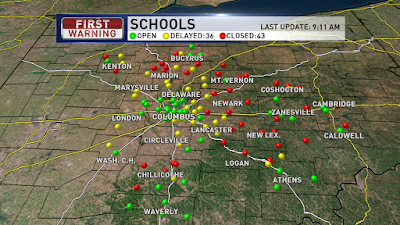 It was enough ice and snow to cause a lot of schools to delay or close today.

But man! What a great sunrise today! On to the forecast... Very slippery roads for Monday morning. Melting on Sunday left the roads damp and overnight light snow has turned that to ice hidden under some light snow. 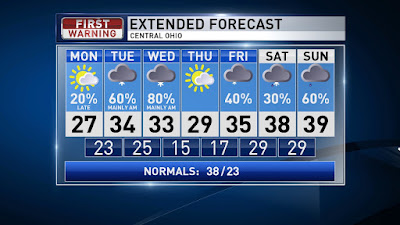 Mix of sun & clouds for Monday and staying cold. More clouds later in the day with more light snow overnight with another 1-2" of snow by daybreak Tuesday then mostly cloudy. More snow moves in Tuesday night and early Wednesday.

We have 1-2" snow again tonight, then Wednesday morning is a little more tricky. It all depends on the rain/snow line. Generally 2-5" of snow, however two exceptions: 1. Wintry mix areas=less snow and 2. Areas near mix, but stay all snow could=higher totals in pockets. #OhioWX pic.twitter.com/QANCcNfF8x
— Andrew Buck Michael (@AndrewWSYX6) February 5, 2018

Southern Ohio will warm up for a wintry mix. Here is a look at the model breakdown... 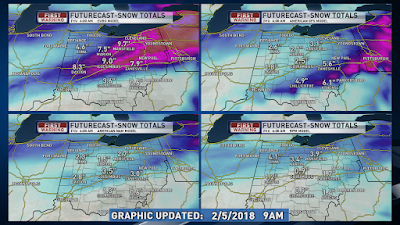 We are generally looking at 2-5" of snow with this round, however there are two exceptions: 1. areas that see the wintry mix will see less snow and 2. areas near the wintry mix, but stay all snow could see higher snow totals in pockets.  Technically this Low will not form until later tomorrow, so it is hard to pinpoint the exact rain/snow line this far in advance.  We have a few pieces of energy coming together for this to form for Wednesday.

Cold and partly cloudy on Thursday then the models are not consistent heading into the weekend. They do agree that we warm up more into the mid-upper 30s. The American GFS brings in another round of light snow on Friday, but the Euro is keeping most of that system in Southern Michigan. They both back off on the amount of precip on Saturday, but they both bring in rain showers on Sunday. Stay tuned for updates for our midweek system and what is coming next weekend as we nail down more of a definitive outlook. Have a good one!