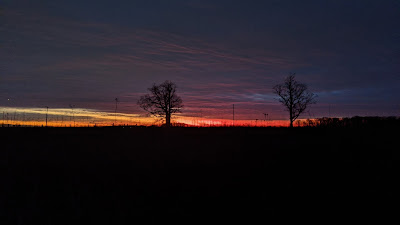 This photo doesn't do the sunrise justice, but this is from Saturday morning.  I had plans to run a 50k in Cleveland, but man... so much has changed in the past week.  We didn't have a single coronavirus in Ohio, but that changed FAST last week and large gathers were cancelled and the parks service pulled the permits for the race.  So I stayed in Cleveland and a friend joined me for a 25k for fun. 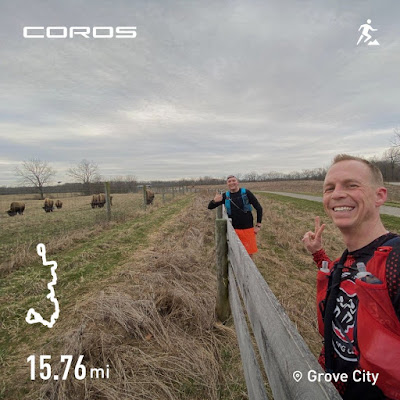 We made sure to keep our distance for the run. 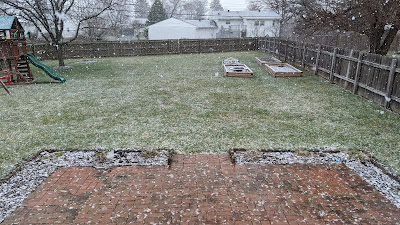 We got the run done before the snow/rain hit and we had some HUGE flakes.  Some of the snowflakes were 2 inches in diameter! 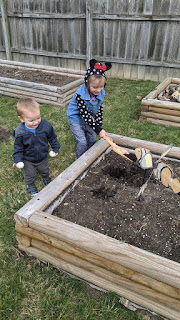 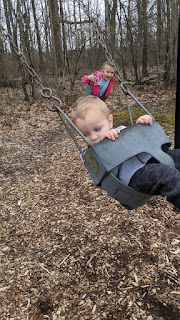 So Summer had a virus a week and a half ago... She had a low fever and a weird rash.  She recovered by Wednesday, but her immune system was weaker so we kept her home.  I had fun with the kids going to the park and getting outside.  By Friday the coronavirus was ramped up and we decided to keep Summer at home again.  So she has had an extended break from school by an extra week. But we are doing lots of learning at home and she has been a HUGE help with some special projects... more on those in a second. 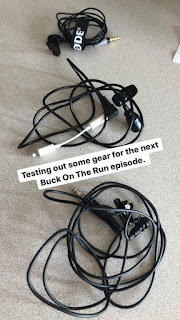 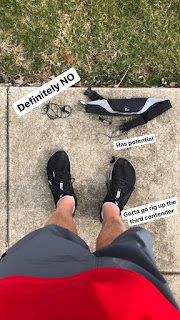 Speaking of special projects... I tested out some microphones last week.  I started this new segment on the WSYX YouTube page called "Buck On the Run." I learned a lot from the first episode to get audio just from the person running so you don't hear the wind and you get better sound from just that person... not me breathing. HAHA.  So I tested out some microphones because some work better than others to record the audio separate then mix it in with the video later. 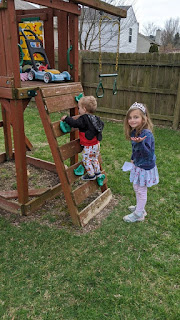 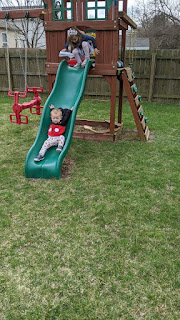 Back to the backyard for more run.  Evan is WAY more of a climber than Summer. He loves our slide and would keep going down that all day long if we let him. 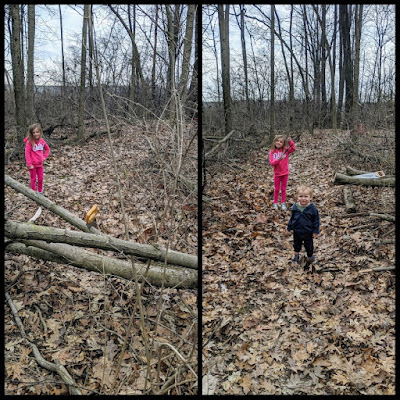 So on to the projects.  The first project was some trail work.  Summer helped clear the smaller limbs from nearby trails and I tackled the larger ones.  I had to cut a few trees that fall to clear the existing trails. Then we went running around on the trails. If Evan lost direct line of sight then he would just freeze even if he was looking at us through a couple of branches.  I found that interesting.  But at least he stops and doesn't wander off. 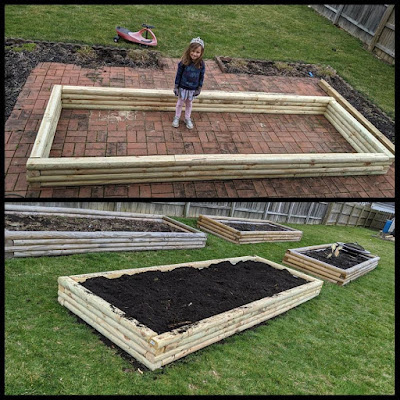 Yesterday Summer helped build our final garden bed.  The existing boards were falling apart and rotting so I replaced them.  The new building format does not require nails or screws and should last much longer.   Summer was a BIG help on this. She liked stacking the boards on the patio to do a "dry run" and get the drilling all done.  Then helped carry the boards out to the hard.  Then I used rebar and pounded them into the holes to pull it all together. 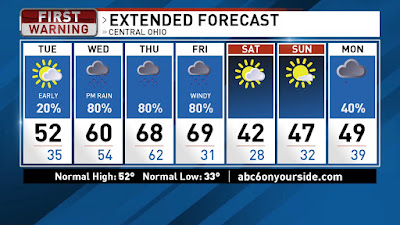 Good Tuesday morning and Happy St. Patrick's Day for anyone celebrating.  We are starting off damp with some early morning showers.  They are mainly to the south and already moving out, so let's go with a 20% chance of rain for early today then we can drop that out by the end of the morning commute.  Clouds will break up some in the afternoon for hopefully a little sunshine and high temps in the lower 50s.  We will be mostly clear tonight with a few passing clouds and low temps in the mid 30s. Wednesday we start out with a little sun then increasing clouds and highs around 60.  We will see showers move in during the afternoon and the rain will stick around through the evening and overnight.  A few rumbles of thunder are possible, but severe risk is low. Storm Prediction Center has Central Ohio in the General Thunderstorm criteria. Most of that rain will be gone by daybreak on Thursday and the majority of the daytime hours will be drying out.  Surge of warm air later in the day will warm us into the upper 60s.  Another wave of rain will move in late Thursday and that will stick around into Friday as a strong cold front kicks through midday.  Temps start falling for Friday PM once the rain moves out.  We will spend most of Thursday PM and Friday in the 60s.  Strong winds Friday PM out of the north will push in colder air. Saturday morning we wake up with temps around 30 and only warming into the lower 40s with partly cloudy skies.  Mostly sunny Sunday with morning temps in the upper 20s and highs in the mid 40s. Thankfully a dry weekend, but it will be chilly so dress warm.  A little rain looks to return later on Monday.  Have a good one! 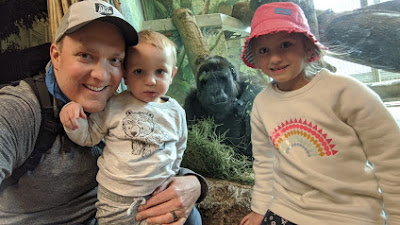 The kids and I went to the Columbus Zoo last week.  It was a sunny day and "mild" temps, so we wanted to go before it started getting too busy.  We went to 90% of the exhibits that were open.  Lots of animals were out and we had a blast.  This is back from the gorilla exhibit.  We were interacting with this one for a while. 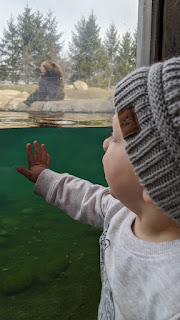 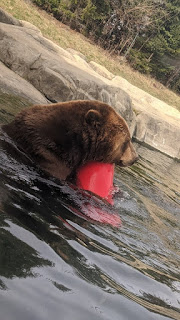 Evan liked the bears as well.  He was a little unsure about the water and how he could see above the water and below the water at the same time.  One bear was in the water playing with a floating device. 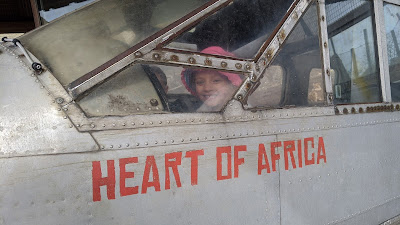 Summer loved the lion exhibit.  Look through the back window carefully.  You can see the lions laying on the ground behind the plane. 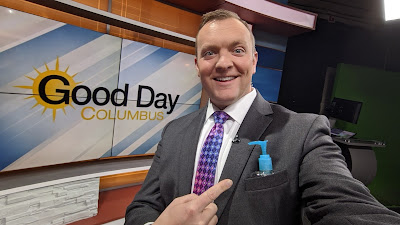 I got a little creative Friday and lost the pocket square because the bottle of hand sanitizer fit perfectly. 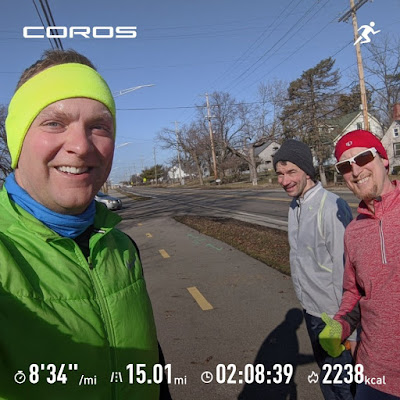 Saturday's long run was a lot of fun.  I did the first 7 miles solo then the last 8 miles was with this fun group of guys.  LOTS of new runners out for the group run as well. 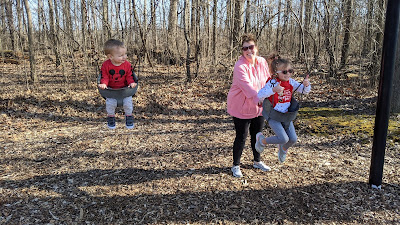 We tried to get outside and enjoy some of the sunshine and warm temps yesterday.  We walked around the neighborhood and then played in the backyard a while at home. 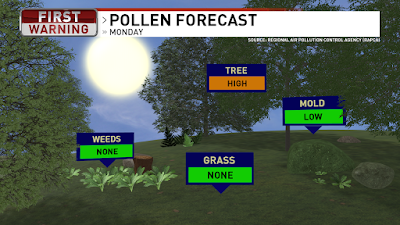 My eyes are a little itchy today... Sure enough, tree pollen is already coming out and causing issues.  We will see that drop a little tomorrow with rain, but more tree pollen will be coming out later this week. 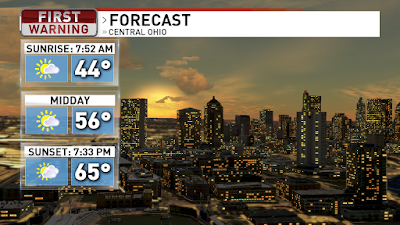 Since Daylight Saving Time kicked in yesterday, we get a sunset after 7:30PM, but the sun does not come up until just before 8AM now.  So morning drives will be darker for a while. 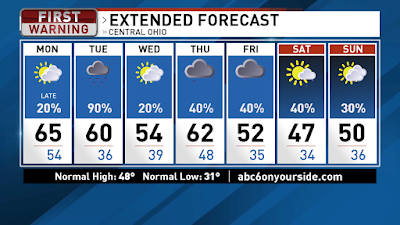 Quite an active week on the way with four waves of moisture, but thankfully temps stay mild most of the time.  We stay dry for your Monday with temps staying warm and we will start out in the mid 40s and warm into the mid 60s with a mix of sun & clouds.  Clouds thicken up this evening with rain moving in tonight.  Mild and wet overnight with rain & showers.  A few rumbles of thunder possible as well. Rain will stick around for the first half of Tuesday with highs around 60.  Rain moves out midday and then mostly cloudy.  Winds will be brisk today, tonight, and early Tuesday out of the southwest then switch to the northwest tomorrow once the rain moves out.  A little lingering spotty rain possible Wednesday, but most of the day will be dry for most of us.  Going with a 20% chance of rain Wednesday since most of us will stay dry with mostly cloudy skies and highs in the mid 50s. Our next wave of moisture comes later Thursday into Friday.  We will see another surge of warm air ahead of the rain, similar to today.  So we warm into the lower-mid 60s on Thursday with rain moving in during the evening and overnight.  The rain moves out early Friday and then cooler air moves in for the weekend.  Highs on Friday in the lower 50s.  Overnight lows for Friday night and the weekend will be in the mid 30s.  The fourth wave of moisture moves in during the second half of Saturday.  With highs in the 40s it will be a colder rain for Saturday PM and even some snow possibly mixing in to the north for Saturday night and early Sunday.  The whole system kicks out early Sunday then a high of 50 with decreasing clouds through the day Sunday.  Have a good one! 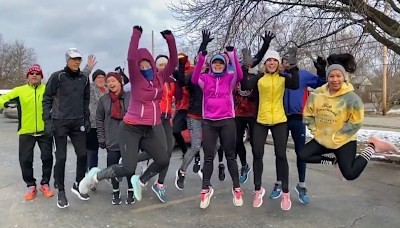 Sunday's run was on Leap Day so Megan in the run club talked us into leaping.

I met up with Carl beforehand to get a few miles and got a little over 11 miles for the early morning run.  I then stopped and had breakfast with the family.  Evan still does his morning naps so if I did all my miles then he would be sleeping before I was done.  So I grabbed breakfast with the family then went right back out for another 9+ miles to get me up to 20.5 miles for the day.  Then the rest of the day was family time. 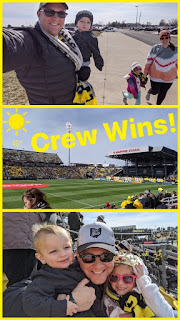 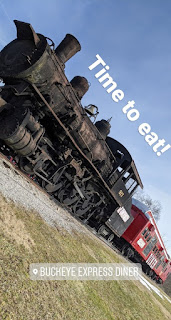 More family time on Sunday.  We went to the Columbus Crew SC on Sunday with the family.  We won!  The sun helped make it feel warm.  Then we met Dawn's family near Mansfield for dinner.  LOVE the burgers at Buckeye Express Diner. 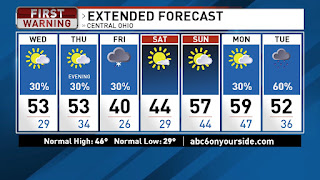 Mild temps returning today along with a few rain showers.  We will start the morning with temps in the mid 30s and sunshine then clouds roll back in quick for the middle of the day. We have a quick clipper system swinging through and that will bring a few quick rain showers for midday and the afternoon. Northern Ohio could see a little snow mixing in with the rain because they will be colder.  Clouds then clear quickly following the rain. We will warm into the low-mid 50s today with a brisk breeze. Mostly clear tonight and we fall into the upper 20s with patchy frost.  Sunshine to start Thursday with increasing clouds later in the day. Highs back in the low-mid 50s. A couple of scattered showers possible Thursday evening as a cold front swings through the region.  Some lingering light rain/snow showers on Friday with highs around 40. The weekend is looking really nice! We will be cold in the mornings with temps in the upper 20s, but sunshine warms us into the mid 40s on Saturday and then partly cloudy Sunday and mid-upper 50s.  Rain returns later Monday into Tuesday with temps still in the 50s.  Have a good one!