Busy start to Spring, but winter weather not completely done... 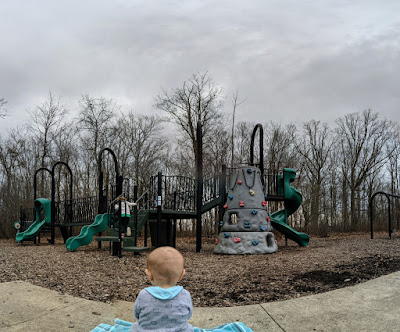 For the official start to Spring I took the kids to the park.  Evan watched Summer run around the park and he was loving it. 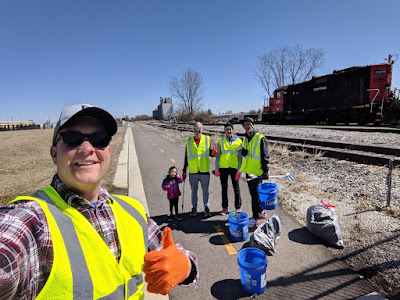 Summer joined my on Saturday for the trail clean-up with my peeps on the Columbus Westside Running Club.  Beautiful day to clean up litter from the winter months. 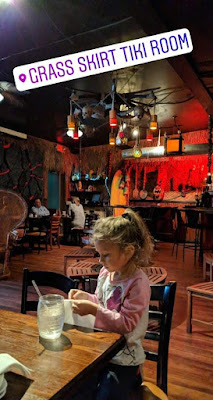 We got together with the preschool moms and kids, who are on spring break, on Monday.  We went downtown to the main library then out to lunch at the Grass Skirt Tiki Room.  Really cool place and great iced tea! 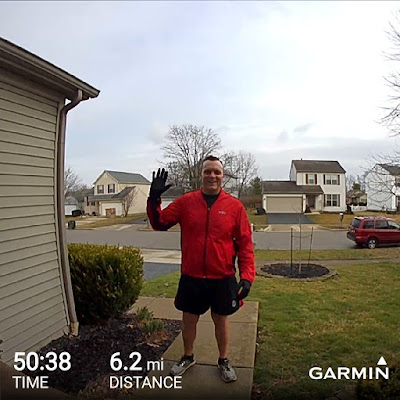 Then I managed to squeeze in a 10k while the kids napped that afternoon.  I 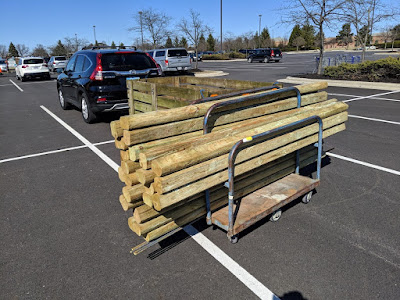 Yesterday I borrowed Kurt Ludlow's trailer and picked up some lumber to rebuild two of my garden beds that are falling apart. 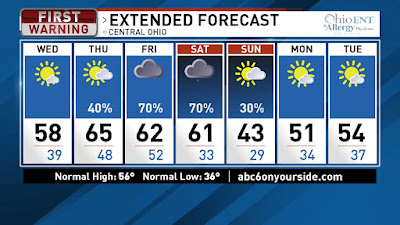 Another beautiful, sunny, blue sky, warm day ahead! However, rain is returning soon, so get out there and soak up the sun! Mostly sunny today with high temps in the upper 50s and a light southerly breeze. Increasing clouds tonight with low temps in the upper 30s. We will see a few spotty showers possible around daybreak Thursday then mostly to partly cloudy most of the daylight hours with temps climbing into the mid 60s. More showers start sneaking in from the north later in the day Thursday. On and off showers likely Friday with highs in the lower 60s. More showers and storms for Saturday afternoon and evening as a cold front pushes in colder air for the second half of the weekend. So highs near 60 on Saturday with the rain and then highs in the lower 40s on Sunday. As colder air moves in Saturday night we could see a wintry mix on the tail end of the rain, but most of the event will be rain. A few flurries possible early Sunday then decreasing clouds, cool, and breezy. More sunshine is back for the start of next week with temps slowly starting to warm again. The pattern rolls on... 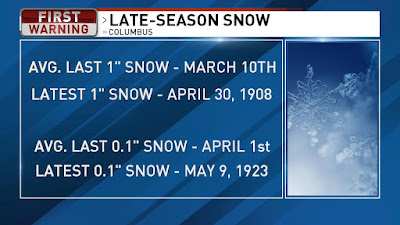 And if we DO see some snow... it is not uncommon for us to see snow this time of the year.  So I will just leave this here... I am taking a little time off, for some family time, over the coming days.  Have a good one! 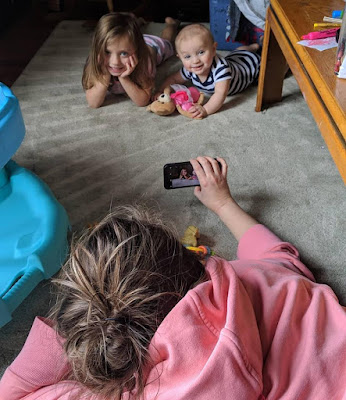 Family is doing great. Summer and Evan are both at such a fun age.  Evan is starting to become more mobile by the day, but not yet crawling just yet. More like scooting without a purpose.  Summer is smothering him with love.  Dawn's busy capturing every moment.  I can't wait until it warms up and I can get them all outside to play in the yard. 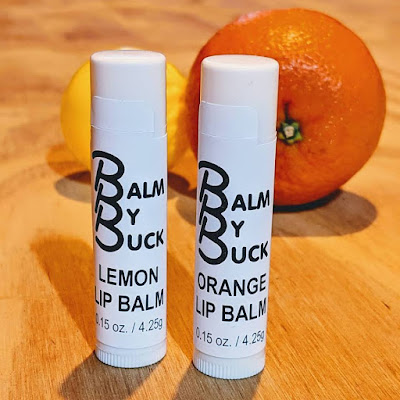 Speaking of spring... I had been testing a few spring flavors for lip balms and lemon and orange turned out great.  I have a couple others that I may hold off on using this coming late-summer or fall. 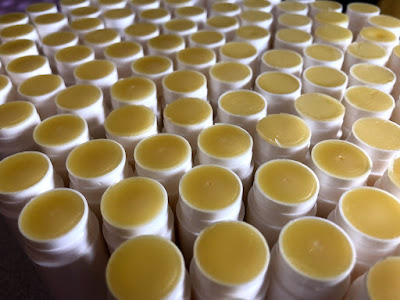 So I have been busy making a LOT of lip balms for the website: BalmByBuck.com 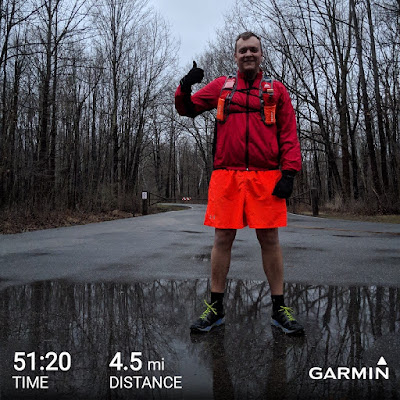 I have been getting back into running after my foot issue.  I think I may switch up shoes and go with a wider toe box for my next pairs of shoes.  I have loved Brooks, but I think my foot is a little too wide for their standards widths.  The problem is that I have a pair of brand new Brooks... so I may try selling them and put that money towards Altra shoes.  I want to go and try on Altras first though because they have a zero drop. 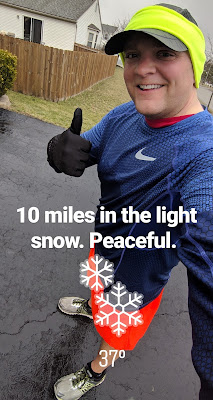 Until then... I will keep running in my Brooks until I can squeeze all the life out of them. Had a great run on Sunday, but a blister started forming on the inside of my foot while I was still about 2 miles from home.  Power on! 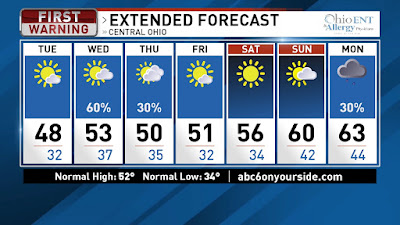 We have some fantastic end-of-winter and start-of-spring weather on the way! Between now and Sunday we will likely see one wave of precip coming late Wednesday into early Thursday as rain, plus we will see warming temps. Spring officially arrives Wednesday at 5:58PM. Today we will start off with some frost and cold temps, along with a few clouds. Mostly sunny through the day with highs reaching the upper 40s. Wednesday will start off with some sun and a brisk southerly wind pushing temps into the lower-mid 50s. Clouds will increase through the day Wednesday with scattered rain showers Wednesday evening into early Thursday morning. The rain will move out early and then mostly cloudy Thursday with highs near 50. More sunshine Friday with highs in the lower 50s. Sunny Saturday and highs in the mid 50s. Increasing clouds again on Sunday with highs near 60. So a fantastic first weekend to get out for a spring walk or running errands. Rain returns early next week. Have a good one! 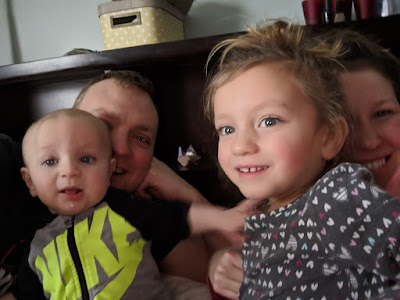 Hello! It has been a hot second!  Let's keep the wrap-up short and fun.  Family is doing well.  Evan is starting to sit well and scoot a little.  Summer is very encouraging of him to start running around the house.  She smothers him with love. Evan is a VERY happy baby and started eating foods.  He does not like oatmeal, but was passive with the rice food.  Peas were ok, but he SLAMMED his carrots yesterday.  Excited to feed him more carrots today.  He was diving his head into the spoon by the end of eating yesterday.

Speaking of legs... Well... Feet.  I had my left foot looked at after the two issues.  I have been given the yellow light to start running again, but have to be careful and monitor it. 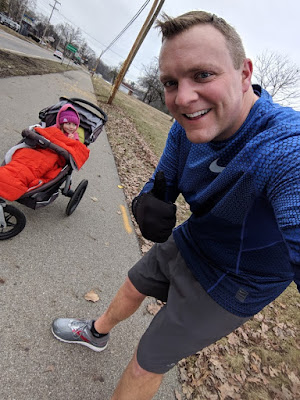 Summer and I went out for a run last Saturday. 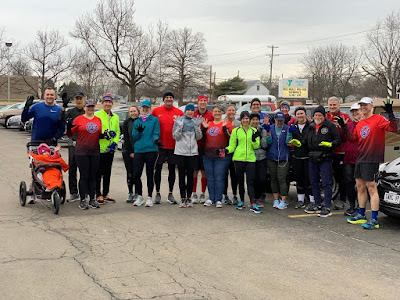 It was nice seeing all my running peeps with Columbus Westside Running Club. 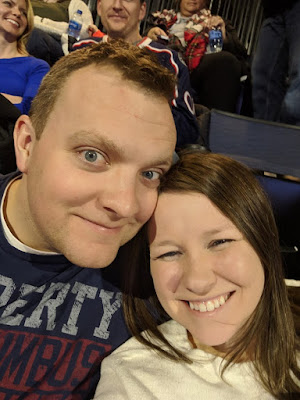 I did get to go watch the Blue Jackets last Thursday with my lovely wife.  Kurt Ludlow asked for us to join his wife and him.  It was a LOT of fun. 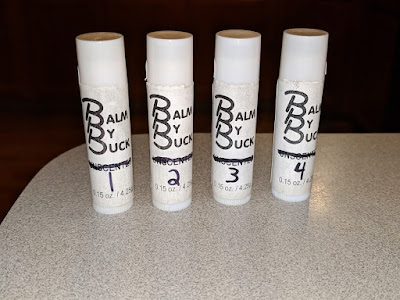 I have also been experimenting with new season flavors of lip balm using different essential oils.  I will have those on BalmByBuck.com soon!  So I have that on my agenda.  Then I have two presentations coming up.  The first is with AAA and the second is at the Ohio State Severe Weather Symposium. 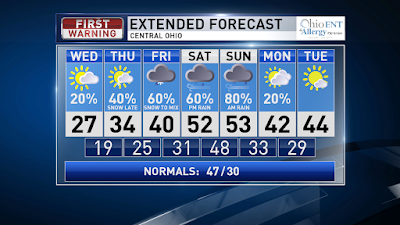 We have quite a lot of weather to breakdown for the coming days. Today will be partly cloudy, cold, and breezy. A few spotty early snow showers then just a few flurries and fairly dry today. Tonight a system passes by to our north and some light snow showers possible north and flurries for the rest of us possible. No significant accumulation expected over the next 36 hours, but a few snowflakes at times. Highs in the upper 20s today and stiff breeze making it feel like the single digits & teens most of the day.

Thursday the winds will be light with temps warming into the mid 30s and partly cloudy skies. The system we have been tracking all week looks to clip Ohio with the biggest impact being Southern Ohio. So Central Ohio & Columbus may be right on the edge of this and watch most of the action pass by to the south. Snow will move in late Thursday and Thursday night. By Friday morning the temps will be cold enough for snow and as we warm to a high near 40 then it will transition over to a rain/snow mix. Dry air moves in pretty quickly so it may limit the amount of time we will see the mix and most of the system may be mainly snow. As far as accumulations, by midday Friday, far Southern Ohio, near the Ohio River, may see 2-4" then Southern portions of Central Ohio will see lower totals. One rogue model is (still) pushing this a tad to the north, so be sure to check back in to the forecast on Thursday for any adjustments to the track. So slick/wet for parts of Ohio for Friday's roads. then warming and roads should be in decent shape by late Friday.

High pressure will bring more sunshine for early next week and cool temps. Have a good one!