Balmy December & Christmas... so what about January? 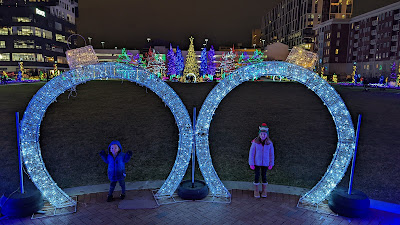 Hope everyone had a great holiday... but we still have 3 more days left in December, so figured I would pop on here to check in and also look ahead to what January will have in store for us. We had a lot of fun with the kids this holiday season. Going out and looking at lights a lot. This photo was from Columbus Commons. 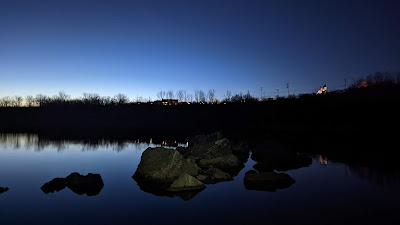 My last long run was around the new Quarry Trails Metro Park. Cold morning, but a beautiful morning with very little wind. 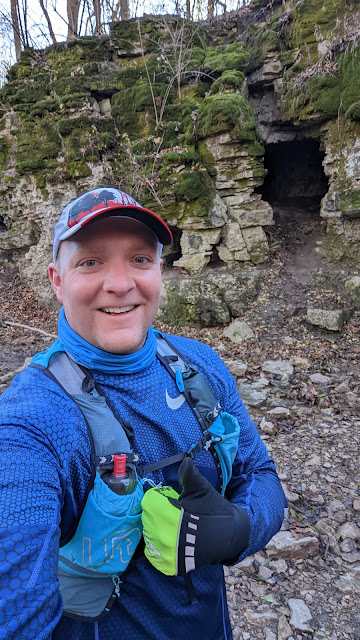 I linked it up with Griggs Park along with the Indian Village area on the west side of Griggs. Super cool area to check out. 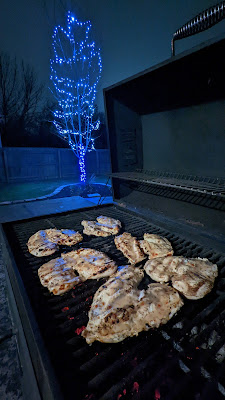 The afternoons were warm enough and dry enough to fire up the grill. I love grilling out during the winter. Something extra special about it. 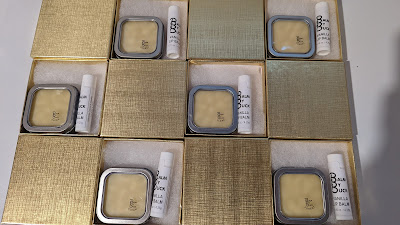 I was also busy with my Balm By Buck orders. A few larger orders for gifts. 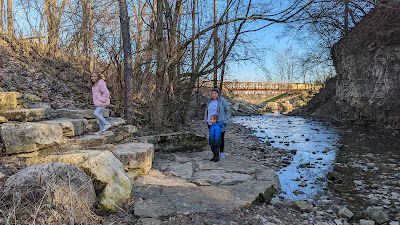 I had hernia surgery in the middle of the month, so I took some time off to rest. I was cleared for walking once the pain went down, so I took the family back to Quarry Trails and we went exploring. 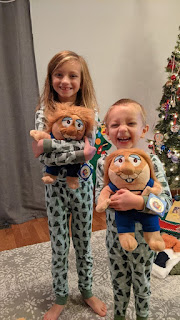 The kids had a great Christmas. I love seeing the sparkle in their eyes this time of the year and I hope to hold on to the memories the rest of my life. 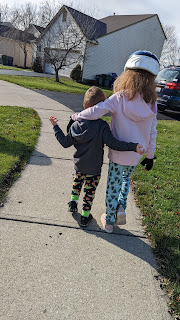 Temps were so warm around Christmas that went for bike rides and walks. No complaints here. I wish we would have had snow on Christmas, but we had that last year and only get it 25% of the time in Central Ohio. So the odds are not the best.

We have 3 days left in 2021 and I wanted to see if warm Decembers mean anything for the following January. So we may end up #3 warmest December, in Columbus, since 1878.  So let's look at the other 4 Januarys that followed... 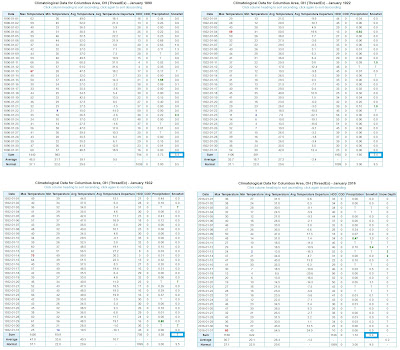 You can click on the image to blow it up larger and see the stats.  As far as temps, it was split with two colder than normal and two warmer than normal. But they all had less snow than normal with 5.4", 5.4", trace, and 3.4" and the 30 year average is 9.5" of snow. So an average of 3.6" of snow the January following a warm December. Of course patterns can change, but figured I would dig into the record books to look for you. If someone is looking to make a bet with you, then I would take the under for January snow, compared to normal. 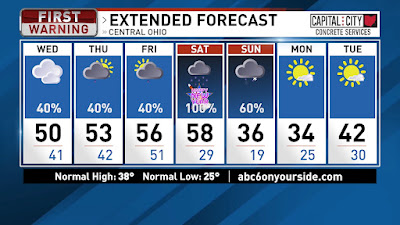 The rain is moving out and we will be mostly cloudy and cool today with highs around 50. A few pockets of mist or drizzle possible, but generally a dry and gray day. A few peeks of sun possible. More showers kick in tonight and they will be light and scattered with low temps in the lower 40s. Mostly cloudy with a few showers Thursday. The best chance for rain is in the morning, but even a couple afternoon light showers are possible. Highs in the lower 50s. Friday will be similar, with mostly cloudy skies and then more rain moving in later in the day. A very wet Saturday is on the way with highs in the upper 50s. We could see 1”-2” of rain on Saturday, for the first day of 2022. The record rainfall for January 1st is 1.28” of rain. Colder air races in Saturday night, as the rain leaves, and then pockets and snow possible on Sunday. The snow will mainly be from the Great Lakes, with the lake effect machine starting back up. So that means the best chance to see any snow Sunday will mainly be to the north and downstream of lakes. Highs in the mid 30s on Sunday. Mostly sunny to start next week with highs in the mid 30s again on Monday and then lower 40s on Tuesday. Have a good one! 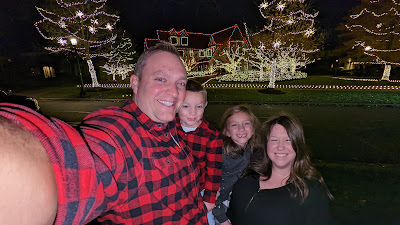 Hello! It has been a hot minute. This is not our house, above, but we love the decorations, so we stopped to take a photo in front of it earlier this week.

I love seeing the happiness in the kids this time of the year. They just love life and the spirit of giving. We picked up some toys Saturday morning for Toys for Tots. The kids also got to meet Santa when they dropped them off at the station, while I was working. 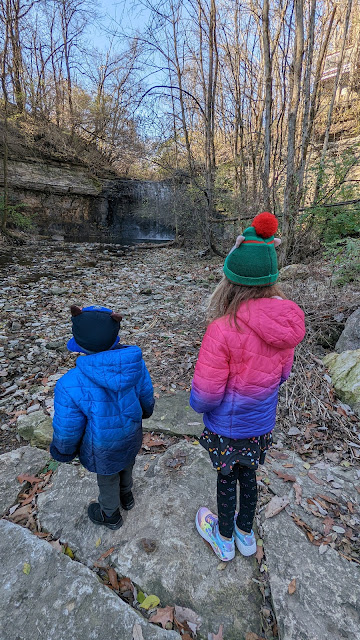 Another fun gift is that the new Quarry Trails Metro Park opened up! I think I have been there about 4 or 5 times in the last week and a half.  It is located just a few miles from our house. 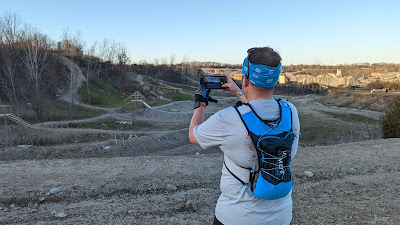 I also ran down to the park, with my buddy Tony. It was his first time there so I wanted to show him the sights and sounds. The waterfall is the kids' favorite. 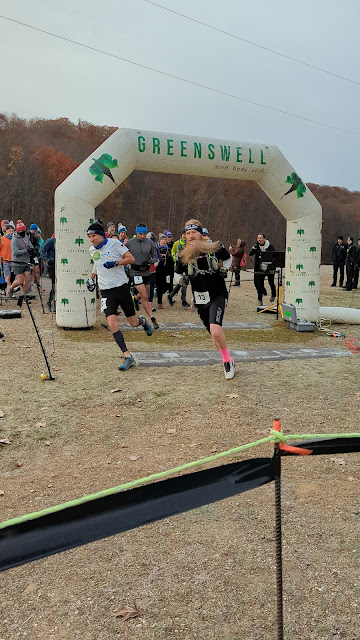 I have been backing off on my running lately. But trying to give back and volunteering instead. I helped out with the inaugural Alley Marathon in Lancaster. Some amazing athletes out there. Harvey Lewis was there among other fast local runners. 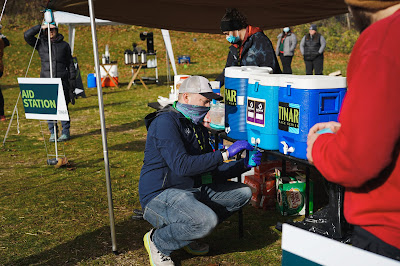 I was working at the aid station and helping the athletes refill their drinks and getting them nutrition when they came through, every 2.2 miles, on the their loops.

I have also been doing some painting at the house. The basement only had a half coat of paint when we bought the house and so we wanted to clean it all up and make it the dedicated toy room for the kids.

So nice to take most of their toys and put them in the basement for them to have their own space to do what they want. 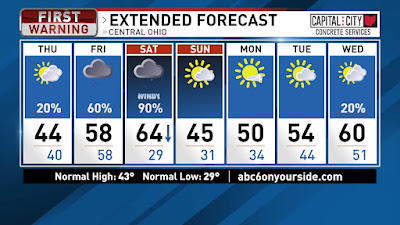 Temps are cold this morning, mid 20s, but we are on the up and up with milder temps heading into the start of the weekend. The chance of rain is also going up. Today is a pretty quiet day with temps in the mid 40s for the afternoon with mostly cloudy skies. A few spotty light rain showers are possible later today and overnight. We will stay cool overnight, with low temps around 40 by Friday morning. A few showers possible from time to time Friday morning and midday with temps warming into the 50s for the second half of the day. More scattered rain likely later in the day. The heaviest rain will be Friday night and Saturday morning with the potential for some storms as well. The Storm Prediction Center has put Central Ohio in the Marginal Risk (isolated) for severe storms Friday night and Saturday morning. The main threat would be damaging winds, but heavy rain and localized flooding also possible. Temps early Saturday morning will be in the lower 60s when we are dealing with the rain. However, a cold front will swing through later in the morning Saturday and we will have quickly falling temps. Winds will be fairly light today and Friday, SE 5-10 mph, but Saturday we will have winds out of the west 15-25 mph and gusts 35+ mph possible. Our temps by the afternoon/evening Saturday will be in the 40s then 30s as drier air moves in. Sunday will be partly cloudy and dry with seasonal temps, mid 40s. More sun Monday with temps warming up to around 50. Partly cloudy and mid 50s on Tuesday then 60 looking likely for Wednesday with just a slight chance for rain. More rain by the end of the week with a cold front returning. Have a good one!