Confidence is very high with the winter storm on the way.  The GFS did throw out a southerly track this morning, but that was the only odd ball, so you can pretty much write it off.  There is one caveat with this and it is the chance for a wintry mix, including rain.  Above you can see the accumulated rainfall and the Southern and Eastern parts of Ohio will see a little rain... and thus cutting down their snowfall totals.  That is the high-res Canadian model.

Now we take a look at the snowfall totals that the models are kicking out.  Above is the high-res snowfall totals through 2PM Monday.  The measurements are in water equivalent readings in millimeters.  The general rule of thumb is that 10mm of liquid precip is roughly equal to about 4 inches of snow.  The rest of the maps will be in inches of snow...

Above is the NAM model on the right and the GFS on the left.  GFS is still going with the most southerly track, but it normally pulls north with the model runs just before the storm hits... not too concerned with that.  NAM seems to be super excited for the snow, so tone that down a bit too. 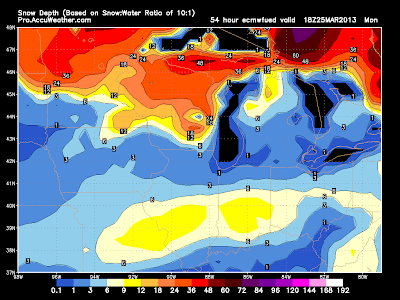 Euro has remained pretty steady with its forecast all the way through the week.  It shows the lower amounts of snow for southeast Ohio and West Central Ohio/Southwestern Ohio with the most.

Which brings us to my thoughts.  I have a pretty high confidence with this forecast... again, with that one caveat.  There will be pockets of colder air and warmer air that may throw these numbers off, but generally speaking this forecast has been dialed in VERY closely by both Bill Kelly and myself.  We will be doing double duty tomorrow night in the weather center.  I think the Dayton area and Miami Valley could see 6-8" and then as you track further south and east towards Columbus then 3-6"  The far south and east will be seeing slightly less because of the wintry mix and rain and going with 2-4".

Timing of the snow:  The leading edge will likely start off as a wintry mix on Sunday then transition over to snow as temperatures cool through the lower atmosphere.  It will start near Cincinnati near daybreak and arrive to Dayton mid morning and then Columbus by noon or shortly after.  The key thing to watch (especially across the south) is when it switches back to snow.  If it stays as rain most of the day and overnight into Monday then you may be looking at even less than the 2-4".  The snow will continue fairly steady overnight and come down heavy at times, especially across Western Ohio.  By Monday morning most of the snow will have already fallen, but we will still see lighter snow showers throughout the day.  Most of the snow will push out by Monday evening with only a few flurries left around Tuesday.  The good news is that temperatures will be warming toward the end of the week, but not warm enough for a quick melt.  Stay safe, spread the word of the coming snow (or share the link to this blog), and as always, have a good one!

P.S. I will be using #OHSpringSnow on Twitter, Instagram, and Vine... so be sure to use it!
Posted by Andrew Buck Michael at 8:43 PM