So there are two BIG changes.  The storm has shifted a little further south, but in doing that, it will likely push the warm air further north.  Kind of hard to wrap your mind around, but think of it like a waterbed.  You push down on one side and the water goes up on the other side...  Those two things will GREATLY affect how much snow you will see.  I really am not a huge fan of numbers for this system because if you stay all snow then you will be dealing with half a foot easily, but with the warm air, it will cause rain instead.

Here is one of the forecast models of snow, but I still think it is overdoing the snow a bit.

Here is the timing of the entire system.  We are already seeing sleet mixing with rain and snow at 11PM Monday night.  We will cool off a little more and see light snow/wintry mix the next few hours.  By Tuesday morning we will have a light coating, maybe an inch or so of snow.  Then we warm up and we switch to on and off rain showers through the middle part of the day.  The rain continues through the evening commute.  Then it gets interesting.  The sooner we switch to snow, the more snow will accumulate.  The models are having the switch from rain to snow from about 8-10PM for Western Ohio and then 10PM-12AM for Central Ohio.  The heaviest snow will fall a little further south than my earlier blog today.  Also keep in mind that the leading edge of the snow will likely melt on the wet, warm pavement.  The snow showers will continue through midday Wednesday and most of the accumulating snow will fall very early Wednesday morning before you likely wake up. 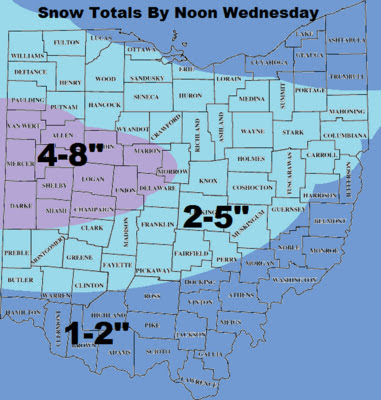 Hope this helps, and feel free to comment on the blog, here.  I will respond to each and every question.  Thanks, be safe, and have a good one!