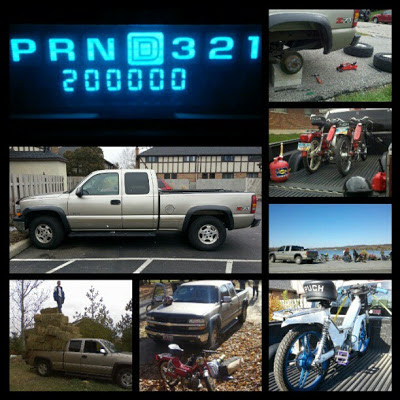 I have been watching the odometer in my truck for a few weeks... I passed the 200,000 mile mark today and it doesn't look a day over 100,000.  I have really lucked out with this truck.  I bought it used in 2007 and has needed very little maintenance so far.  Spark plugs here, new belts there, some cosmetic work after hitting a deer... All in all not a bad life so far.  I hope to get another 200,000 out of it.  I went through my phone and it is amazing to look at all the journeys.  Lot of good times and good memories tied up in your vehicle.

Alright, on to the weather... lot of stuff to talk about.  The pesky flurries have been sticking around making it feel like a snow globe, but not accumulating to anything.  We stay chilly Sunday and Monday and a little sunshine will try returning as well.  Then it gets interesting... (Keep in mind that this is still 3+ days out so the track of this will likely change a bit, so stay tuned...) Early Tuesday we will see energy from Canada swing down with the heaviest precip from Indianapolis to Cincinnati.  At the same time a Low will work up from the Gulf.  These two will collide and make for an interesting middle of the week.  The line will have rain to the south, but the northern fridge (Including the Miami Valley and Central/South Central Ohio) of the leading Canadian energy will be a wintry mix, including freezing rain.  Our high Tuesday looks to be in the mid-upper 30's.

As our temperatures fall, later Tuesday, the second wave of energy will swing down from Canada.  With our temperatures falling behind the low and behind the cold front, we will switch over to snow.  The heaviest precip with the second wave looks to be just south of a line from Chicago to Fort Wayne to Lima to Cleveland. This second wave will swing through late Tuesday into early Wednesday morning and looks to carry enough snow that you will need your shovel (up to 6"+ in spots)...  Right now I see a few inches for most of Ohio, but more across the northern third of the state.  The southern third of Ohio will deal with the wintry mix more and could see up to a quarter of an inch of ice.  Right across the middle of Ohio (along or near I-70) there will be a little ice and then the snow.

The reason I am not throwing out any specific numbers right now is because the American models have JUST got on-board with this system today.  The CMC was onto this system for a few days, BUT that completely over-killed our last winter system, last week.  The Euro has been on the fence, too, but give it 24 more hours and we will really be able to put a nail in it and pin-point the track better.  So far today the track has shifted north about 75 miles.  So any forecast you have heard so far... take it with a grain of salt, and PLEASE stay tuned to updates.

The good news... next weekend is looking significantly warmer.  We may just give 50° a run for its money.  I will be back Sunday with an update.  Have a good one!