Snow update... upping the totals, for some

Here is a quick breakdown of the models.  The one above is the Canadian model.  It has shifted the snow further south (by 20-30 miles), and so has the rest of the models... but with a caveat. There will be a sharper drop-off.  Also, keep in mind that all of these totals are in millimeters of water equivalent snow.  So 10 mm would be roughly equal to 4 inches of snow.

Also to note, this is accumulated snowfall by Wednesday at noon.  Since we may see a little snow early Tuesday before switching from snow to rain, then back to snow Tuesday night, some of these totals may be slightly high for what we see Wednesday.  The majority of our snow will fall Tuesday night.

Above is the GFS American model.

And the final national image shows the NAM American model. 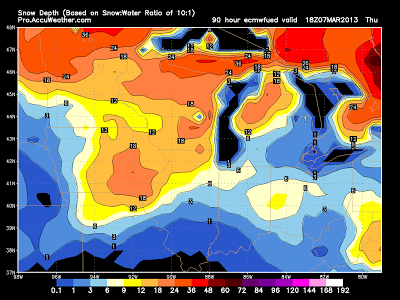 Even the Midwest view of the Euro show a nice hot spot in northwest Ohio with 6+" of snow. 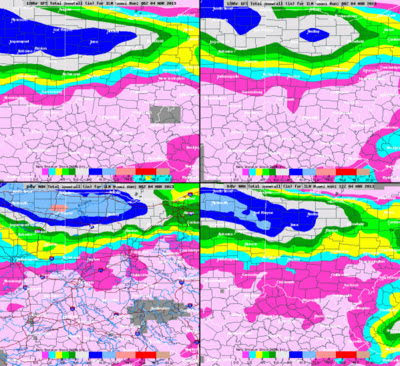 I grabbed the last 2 model runs of the GFS and NAM and made a four panel map, above.  You can click on the image to get the full size and not strain your eyes.

So I think the north will be seeing slightly more than my last blog entry.  US 36 will be our rough divider.  It goes from Greenville to Urbana to Delaware to Mt. Vernon.  North of US 36 I can easily see 4-8+" of snow, the higher amounts will be more north, along US 30, which runs from Ft. Wayne to Lima to Mansfield.  So still keeping with the trend of the Northern third of Ohio getting the most snow.  Between US 36 and I-70 we will see 2-4"... again, the higher amounts further north in that 36-70 zone.  South of I-70 will see even less.  Once we switch from rain to snow there will not be a lot of moisture south of I-70.  Another note is that the Western part of the zones will see more snow... as you approach I-71 or east of there, then the snow totals will start to drop off.  The models are really settling down, so I don't see a whole lot changing between now and when the snow arrives, but I will still be back with an update before it arrives.  Have a good one!