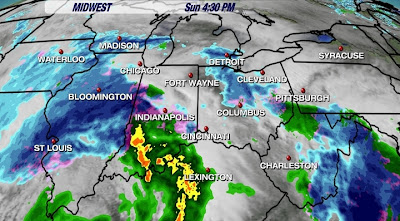 Round one has moved through for the most part.  It is the lighter of the two rounds.  The second round is moving through Indiana and Illinois currently.  that will move into Western Ohio for the early evening and then late evening for Central Ohio.  The heaviest snow will be between 10PM and 2AM.  I would not be surprised if we happen to get a little thunder.  Best chances for a thundersnow will be during the heaviest snow and mainly south of I-70.

Far south will be seeing a little less snow due to their warmer temperatures and not as much across the far northern part of the state because heaviest bands look to be near or just north of I-70.  Still expecting generally 3-6" here in Columbus metro area, but if we stay all snow (no wintry mix), it will be closer to the upper end of that range.  Western Ohio will see the heaviest snow. The key to snowfall totals will be the temperatures.  Any wintry mix will cause the snowfall totals to be on the lower end of the range.  Travel safe and have a good one!  (Pulling an all night double shift)