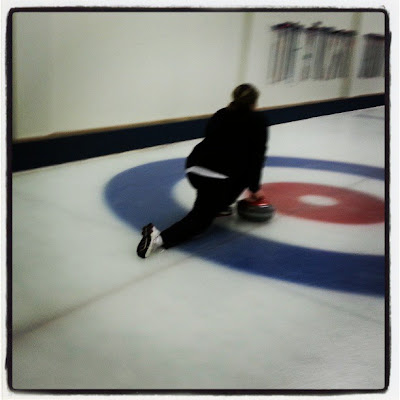 Dawn and I went curling last night.  It was her first time throwing and we had a blast.  She had great form, but was a little cautious doing the practice time. 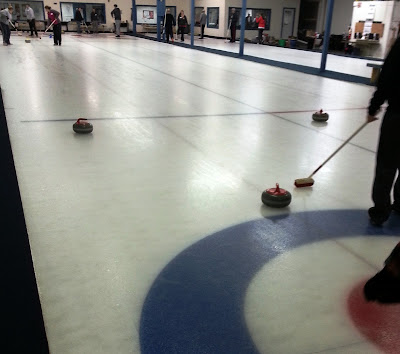 She threw first and she did an amazing job throwing two guards for us.  We ended up winning twice.  Great times. 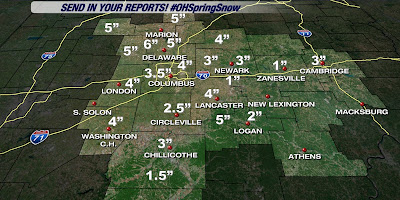 Alright on to the forecast. If you wanted an accurate measurement of the snow you had to get it at about 4 or 5AM yesterday because the pavement was so warm that it melted a lot of it.  The grassy areas saw it stick around the most.  I made a map of the snowfall totals from the viewers and generally we were right on the money.  The NW area saw the most and generally 3-6" range for Central Ohio.  The dry air worked in early and cut down on some of the super high amounts in Western Ohio.  So how did this compare to previous winters or Marches?

Above is the Top 5 snowiest March's before this year.  With the recent snow it puts Cincinnati still fighting to get into the Top 5, but Dayton is now tied for #3 with 1984 and 1968.  Columbus is now #5 snowiest March with only 0.2" left to get to #4.  I think the flurries and light snow showers today and tonight may help with the cause to bump up a little.  We will need to get it within the next 24 hours because no snow for the rest of the month.  Here are the totals for March and winter so far:

So what does the long term look like?  A few flurries through today, tonight, and early Wednesday.  Then we dry out and warm up.  By Sunday, rain returns and maybe a few flurries early next week behind the rain.  The models agree on the next seven days pretty well... but after that it looks like typical spring models for 8-14 days out... HUGE disagreements.  The CMC has us warming up A LOT, but the GFS keeps us cold, and Euro keeps us cold until the end of next week... so 11 days out.  Be sure to check back in, but for now, enjoy the milder temperatures later this week and the snow melting.  Gotta love melting snow in March!  Have a good one!