Time to work on some addition...cuz we are adding to the snowfall totals.

The image with First Warning at the top is from Bill Kelly this afternoon. At the time I agreed, but the snow/ice line has moved further south and that means the snowfall will be more than anticipated, especially along the I-70 corridor.

The second image is the evening NAM forecast. While I think the NAM is overdoing the forecast a tad...it is possible. The precip will start early Wednesday morning and fall the heaviest through the late morning and early afternoon Wednesday. Most of the precip will be done by Wednesday night at midnight other than a few light snow showers.

At this point I think areas to the far Southeastern parts of Ohio will see a bit of sleet/freezing rain and only see a few inches after the switch back to snow(midday Wednesday). For areas along the I-71 corridor from Cincinnati up to Columbus and then from Columbus to Wheeling along the I-70 corridor...I think will remain all snow. That means a LOT of snow. I think along these mentioned corridors (and slightly north) we could easily see areas with 8"+. The northern third of Ohio will see 4-8" still and lower amounts the further north you go.

This has been an evolving storm and appreciate all the feedback and patience. This will likely be a record breaking storm for areas that see the worst of the punch. I am working a double shift Wednesday morning so I get the fun task of tracking this monster. I hope to have another update on Christmas to finalize any subtle changes. Thanks and have a good one. 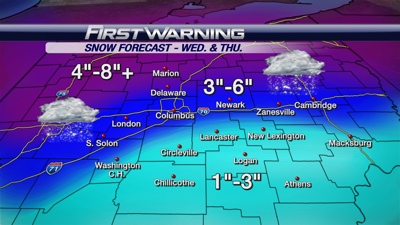 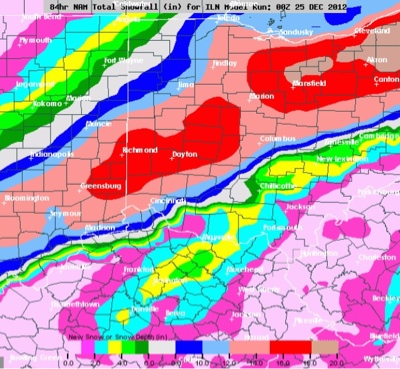