Last time I checked in, things were going great... but then it took a little spin.  I was doing a few errands on Thursday, my day off, and I noticed that the volt meter on my truck dropped from 15 to about 12 so I knew something was up.  I assumed it was my alternator that went out and that would mean that my battery would only last me another twenty minutes of driving before it would die.  I called Advanced Auto Parts to confirm that they did a free diagnostic and then I hurried there before my battery ran out. Battery checked fine, but when I started the truck it got no help from the alternator.  I bought a replacement and limped home on what juice my battery still had.  I have replaced alternators before on my other vehicles, but never my truck.  I did a little research and then went outside.  Really missed my garage at this point, but my tool set at the house did just fine.  Twenty minutes later, no joke, I was back in business. 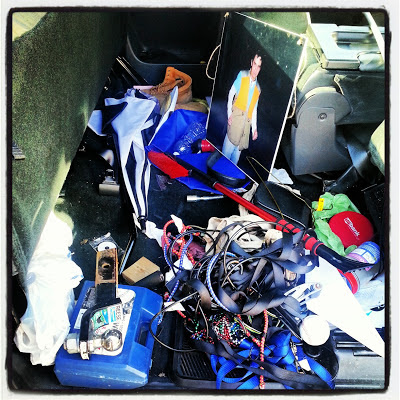 I was VERY happy with how much easier it is to replace on my truck than my previous vehicles.  I cleaned out my truck a little(cuz it was a mess of tie down straps and reporting gear), returned the old alternator, and finished running my errands. 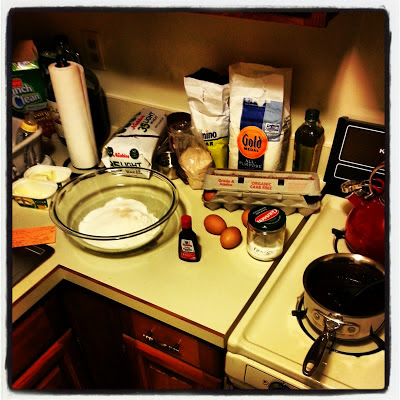 Part of the errands was grocery shopping.  I needed some chocolate morsels for my brownie battle.  I wanted to make brownies with cocoa powder and morsels. 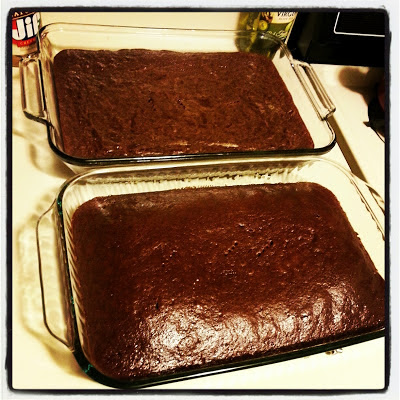 I made both batches... the powder recipe from the cook book lost to the handwritten recipe from my mother... I should have known, right?!  Either way, I will have to continue to weigh the options over the next couple days.  I gave some of them away so not much is left. 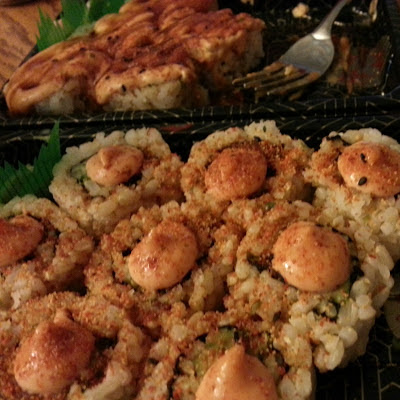 Dawn went home to Cleveland for the weekend and if there is one thing that she will NEVER eat, it is sushi.  I love sushi and the fact that the local Kroger makes sushi fresh daily...score!  Yesterday was my first time trying it and I was a huge fan of the Spicy Cajun.  I did forget the chop sticks though so a fork had to substitute. 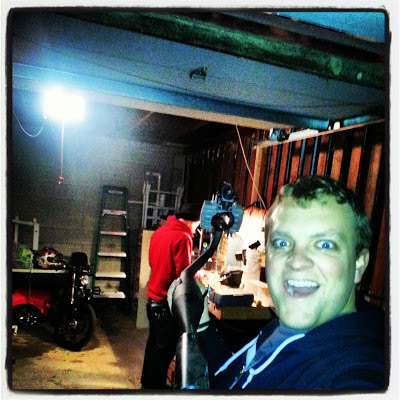 It also turned in a guys night at the garage.  I invited a few of the guys over to work on their moped projects.  It was a pretty fun night working in the garage and getting a start on the winter projects.  The Magnum got its MUCH need new cylinder studs from Malossi.  The older studs were stripped my the last owner and I could tell I was losing compression due to an air leak.  The new studs were put in the case with red Loctite so those things should be SUPER reliable.  I have that setting up and I am going to put on the cylinder tomorrow and that bike should be ready to rock and roll(WSL pipe to come in from 1977 Mopeds)... not much of a winter project.  I did contemplate getting the frame painted and the plastics, but I may hold off on that... not sure yet. 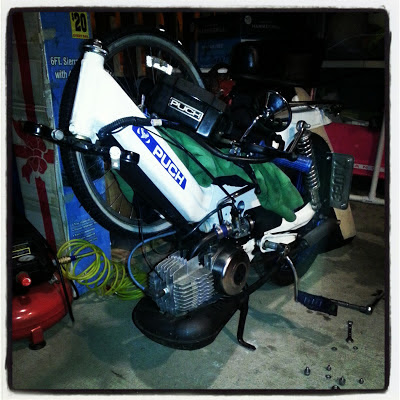 As for my Maxi... I have a few things that need done.  I took off the front end last night to get ready for a new set of k10 forks.  The old forks were just tweaked slightly to the left after my loose gravel incident and I wanted straight and true forks so I am replacing those this week.  So I should have a cheap set of k10's on the market if anyone is interested.  I also need to replace the Magnum pedal crank shaft with a Maxi length.  No need for wide pedals if I am running the circuit pipes.  The only issue is the pedal pin is jammed so I bought a new one so I can mangle the old one.  Those pins are made of such cheap metal it is ridiculous.  I will likely just put the drill press on the ground and drill out the pin... or enough of it so I can punch it out without damaging anything else.

After that we went back to my place to hang out and a good friend, Luke Marshall, was passing through town, so he stopped by the house.  It was his first time back to Columbus in over a year since he was deployed.  He may be bringing his two year old son up to Columbus on Tuesday and we may all go see the Ohio State Basketball game.  Should be a good time. 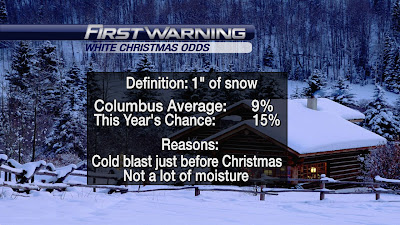 Alright... White Christmas.  The odds are fairly similar between Columbus and Dayton, but the average years with a White Christmas is less than 10%  I was kinda surprised by this because SOOOO many people want at least an inch of snow on the ground, but it doesn't happen all that often.  There is still a chance this year.  We are still watching a strong cold blast of air arriving a few days before Christmas.  The only problem is that there does not look to be a lot of moisture with the system.  I will keep a close eye on it, but right now I think we only have a 15% chance for a White Christmas... still a chance, but not a great chance.

As for the next several days: Unsettled weather for the coming days with scattered rain showers.  Our temps will be unseasonably warm with highs Sunday in the lower 60`s and mid 50`s for Monday.  Scattered rain Sunday with the sun trying to peak out in the afternoon followed my more clouds and rain Monday.  Our temperatures remain cool through the middle of the week ahead of a stronger cold front that will arrive Thursday and bring some of the coldest temperatures of the season by next weekend.  THEN THINGS GET INTERESTING....

So I did some digging of foreign forecast models. There has been a lot of chatter about a decent amount of snow for Ohio for Friday...

l-able" amount of snow on Friday
JMA JP35 (Japanese model): Shows a quick spurt of snow... hard to tell how much would stick because it has dry air coming in quickly after the snow starts
CMC (Canadian model): One shows a "shovel-able" amount of snow, and then the next model run shows hardly any snow

My thoughts... the ECMWF showed a decent amount of snow last year... but it didn't happen. The way this week's weather is handled may play a large part as to which model may be favored this winter. As of right now I am still calling for a 40% chance for a mix on Friday, but it will be watched closely for the days to come. Enjoy the warm temperatures while they are here and have a good one!