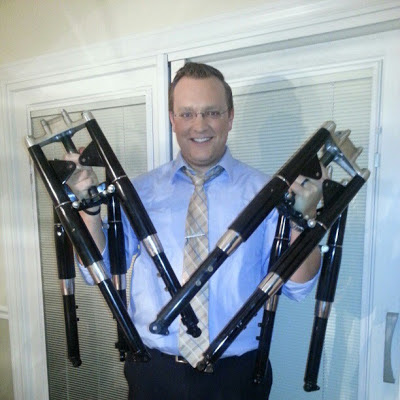 Some call me the king of k10 forks, I don't know why...  Just kidding.  I the k10 Suzuki forks on both of my mopeds and had to do a decent amount of fab work to make them work with disc brakes.  I thought I was going to need a new set of forks for my moped because after I crashed thanks to the loose gravel back in August they forks have been slightly tweaked to the right.  So I ordered a new set and also got three more sets for my friends here in Columbus.  So I spent the last couple days starting my winter projects. 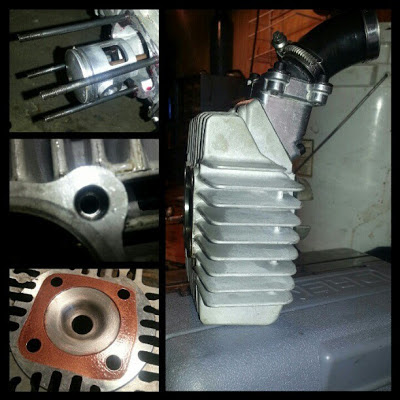 I started off by working on my Magnum because that had the least amount of work.  I added new Malossi cylinder studs, stud spacers, reassembled the top-end to assure no air leaks, and put it back together.  Now all I have to do is wait for my WSL pipe from 1977 Mopeds. 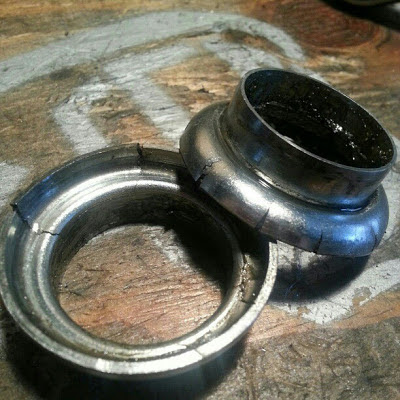 So I started to work on the Maxi and I knew I was going to need new bearing cups and I didn't realize how messed up they were until I took off the old ones.  After one season of riding and the one accident, it was pretty clear that the cups were toast.  Both the top and bottom had some pretty narley cracks and explained why my bike felt a little "loose" especially on turns. 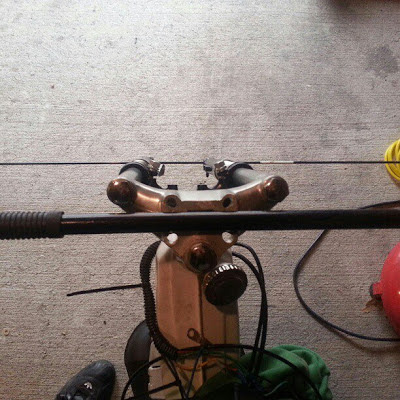 I put on the old forks and after readjusting the lower part of the triple tree I got them trued back up and they are as straight as an arrow again.  I guess I will keep the last set of k10's for whenever the unthinkable happens.  Hope I have that extra set for ever. 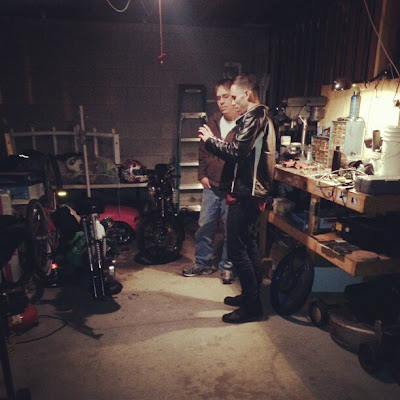 Last night a couple of the guys came over to get some parts and forks and we hung out for a while.  We are in the middle of voting for a name now and it is leaning one way a lot... I will let you know when the voting is over.

On to the snow and changing weather coming... 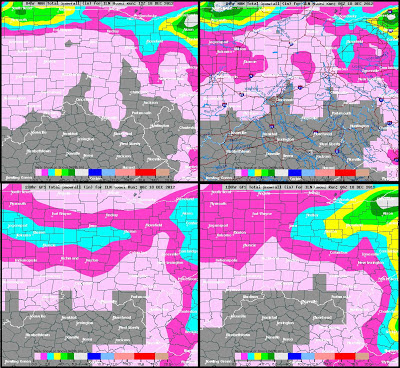 I have mentioned a lot that the foreign (i before e doesn't work foreign) models have hinted at a decent more amount of snow.  They have backed off a little, but still remain showing a decent amount more snow than the American models.  However, I am showing you the American models above.  That is the expected snowfall by Friday.  (You can click on the image for a larger view)  The units of measure is inches for the above image.

Just for fun, here is the Canadian model, above.  The units for this is in mm water equivalent... but since snow is normally 10x more you can assume that the unit is cm of snow.  Easy rule of thumb is that 1 inch is equal to 2.5cm.  So central Ohio it shows some places getting a decent amount of snow... but remember this model is showing a decent amount more than some of the American models.  You have to take it with a grain of salt.

So the big questions is how much snow can we expect... well that will be VERY hard to measure and here is why: 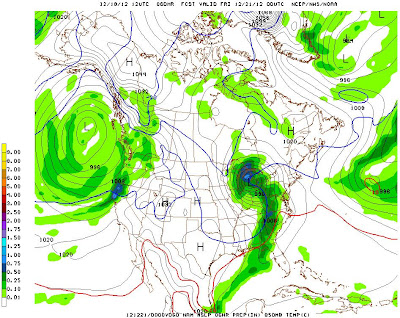 The rain will turn to snow later Thursday as that blue line pushes across Ohio, but look at the black lines.  Those are the isobars(lines of constant pressue, and a GREAT indication of winds).  Starting later Thursday into Friday we will have winds 20-30mph sustained with gusts 40-50mph.  This will mean that it will really punch in the cold air, but the snow that will fall will likely blow and get lost in areas that shelter the wind.  Imagine a baseball field next to a wooded area.  The winds will pick up any snow on top of the grass and ,with the right wind direction, blow it into the wooded area where most of it will stay because the winds will die down.  This will not be a nice snow that falls straight down and you can measure it in the morning.  The winds will ruin all that for us.

So, if you have a sheltered area, I think areas north of I-70 could see 1-2"+(the farther north the 2"+ range), but areas south of I-70 will see around a dusting.  We are still three days out from this, but the models are all starting to agree on a middle ground.  Again, this is if the area is sheltered from the wind.  You will probably wake up and see less on your front lawn because the wind will blow it.  Regardless the roads will become pretty nasty Friday morning.

So mild and drier for the next couple days, rain Thursday, windy and changing to snow later Thursday into Thursday night, and then windy and cold Friday and through the weekend.  Highs will climb into the mid 30's for the weekend and melt some of the snow... going to be interesting to see how much snow is still around by Christmas.  I will be back with more updates so be sure to check back in.  Have a good one!