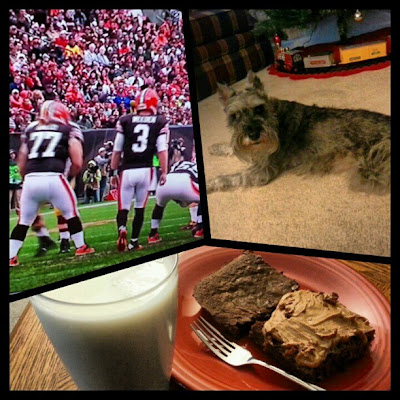 Pretty quite night last night.  Talked with my former DAM Rider, Wes, for an hour to get an update on how life is and how his mopeds are.  I did wake up at 6:30AM to let out Buckeye and was blown away with how nice it was outside.  I laid back down and didn't wake up until 11AM and it was a beautiful thing.  I needed a long night of sleep.  The rest of the day was cleaning, watching the Browns, and killing some more of the brownies.  The fluffy ones are still missing something... I added peanut butter to the top for a little added kick.  You know who needs an extra kick of confidence/motivation?!  The Browns.  They have given up so many games and it is so upsetting.  They looked awesome the first half and then I get to work and turn over to the TV and see that they are down by 17 points.  I don't know why I get my hopes up.  Oh well...

The spotty showers stick around through the start of the workweek as a cold front slowly moves to the east.  Best chance for rain on Monday will be across Eastern Ohio during the second part of the day.  The rain finally moves out of here by early Tuesday as we cool back off slightly from mid 50 highs on Monday to mid 40`s for Tuesday.

Highs near 50 for Wednesday and Thursday before a stronger cold front brings more rain for Thursday.  From this-point-on the models are in a bit of disagreement.  Half of the models(Euro, CMC, and JMA) are calling for a shovel-able amount of snow on Friday, but the other models have dry air working in behind the cold front and only a dusting of snow.  The NOGAPS models shows an inch or so and then the GFS(normally the wettest) is showing the dry air kicking in and only a dusting.  It will be watched very closely, but the one thing all the models do agree on is that next weekend will be significantly colder.  Stay tuned and have a good one!