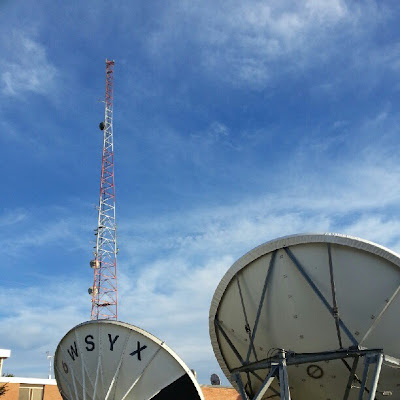 Boy what another fantastic day!  Just a few high clouds and perfect fall temperatures.  Yesterday was a bit of a roller coaster.  I started the morning sweating and running around doing a story on Newark water and how part of the water table is is contaminated from trichloroethylene.  There was an ODOT garage from 1940-1986 where they used TCE as a cleaning agent and now EPA has dropped their levels for dangerous percentages and the state is forced to buy several surrounding properties.  Anyway, I was doing that story sweating and then during my last interview with ODOT the cold front came through with some heavy rain and by the time I got back to the station, edited my story for the 6PM news, and then got out for my LIVE shots for Friday night football in Gahanna... I was chilly.  It was already in the upper 50's by the time the game started.  Refreshing, but I went from AC to heater in one day... gotta love Ohio, right?!

Today, Dawn and I went back down to the hospital to visit and bring Mike some lunch.  I got to hold Anderson and he is so adorable.  Dawn found him adorable as well, but I think after a few times of babysitting him, she may want to continue holding off on kids for a few more years.  Eventually.  After the nail-biting Ohio State win, Dawn went up to Cleveland to visit her family while I finished unpacking the last of the boxes and cleaning the house.  I happened to turn on the TV and saw that the Bourne movies were on so I taped them and know what I am doing tonight home alone.

The cooler temperatures will stick around for a while.  Sunday will be another beautiful day with mostly sunny skies and highs in the mid 70`s.  We warm up a little more by Monday with a high near 80, but more clouds throughout the day and rain arriving later in the day.  Scattered showers and storms for Monday night into Tuesday.  The cold front will push the rain out of the Ohio Valley and we should dry out by Tuesday evening, but cooler.  Tuesday and Wednesday look like the coolest days since early May with highs expected in the mid-upper 60`s and lows for mid-late week in the upper 40`s.  So keep that jacket handy.  We will warm up for the end of the week back into the mid 70`s with another chance for rain just as next weekend rolls around.  Enjoy the great weather for Sunday and have a good one!