Well it has been a long time in the making... I am officially certified as a Broadcast Meteorologist.  I have my degree and everything, but now the AMS has certified me.  I started studying after my honeymoon a year ago and took the first test just before Christmas of last year... Retook it (after missing a handful of questions), again in early May and passed... (toughest test I have ever taken)... then sent in my three video forecasts for approval to be scientific enough and at the same time deliver the weather story... and I found out this afternoon that I earned the AMS (American Meteorological Society) designation as a CBM (Certified Broadcast Meteorologist).  I have been antsy the last few weeks waiting on word and today when I read the email in the weather center I jumped up with excitement.  I wanted to high five someone, but no one was around in the studio.  High five me!   It may seem like only three letters next to my name on TV, but it is huge for my career and establishing myself as someone who wants to do this for the rest of their life. 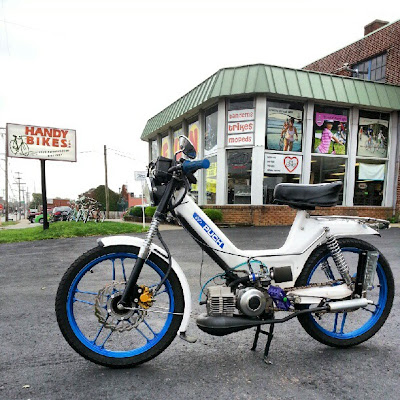 Of course, if you know me... That was not the only good news today...  I rode my moped to work for the first time.  I was riding down 5th Ave and I had to stop at Handy Bikes for a picture of my bike out front.  Handy Bikes is the Mecca for mopeds.  There is a fella named BJ that used to work there and he was EXTREMELY instrumental in making sure mopeds were allowed in the US and especially Ohio.  There were a lot of laws and restrictions put on mopeds back in the 60's and 70's in order for them to be "road worthy" and BJ spearheaded the effort.  He is now retired, but without him... I may not have been able to ride my moped to work today because they still would probably be illegal... like they are in, from what I am told, 9 other countries.  Take that knowledge to Jeopardy. 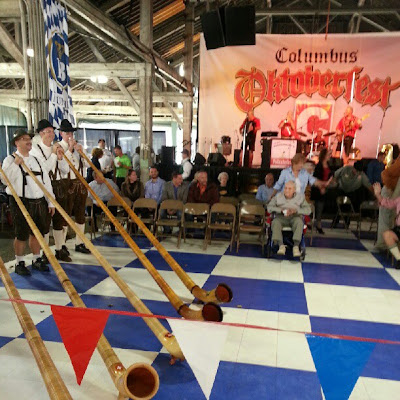 I am back in the weather center tonight, but I did the weather live from Columbus's Oktoberfest for the 5 and 6PM newscasts.  It was insanely loud with the band, but it is all part of the festivities.  If the band is too loud... have another bier. Yes, bier.  Lots of fun, but I had nothing to eat or drink there... and too bad I am working the next two days.  So if any of you are heading there or to any other Oktoberfest during the weekends... have one for me.  Maybe two.

Well on to the weather...  Tonight we will see the skies continue to clear out.  We had the morning fog today, but the moisture has dropped enough that we should not have to worry about fog for Saturday morning.  Saturday will be a mix of sun and clouds with a high near 70 and then a slight chance for light rain across the northern half of Ohio for early Sunday.  Most of us will stay dry, but a weak system will try to swing down... the kinda system that IF we were in December... could bring a little snow...(I know people hate that four letter word, but get used to it... winter is around the corner)  Anyway maybe a sprinkle or light rain shower early Sunday and warming into the upper 60's.  We continue warming into next week with highs expected in the mid 70's by the middle of next week.  We could see a little gulf moisture for the middle of next week, but I am not convinced on it.  It does appear that a stronger cold front will approach for the end of next week with a better chance for rain.  Enjoy the beautiful weekend and have a good one!