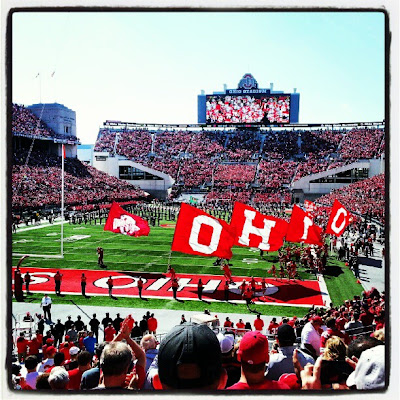 Well the Buckeyes managed to squeak out a win again today...  It was an ugly game and the tackling still was a huge problem.  I was lucky enough to have a ticket offered to me by Dawn's cousin and Dawn hung out with her neighbors who were in town.  It was a fun game, but I got a little sunburned on my nose and forehead. 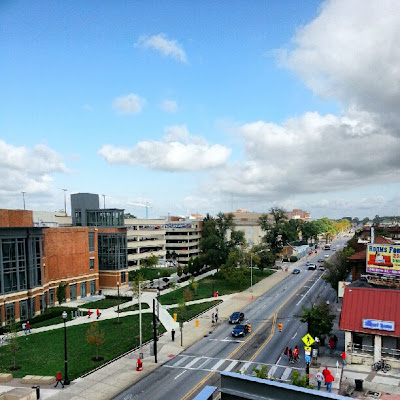 Before the game we met up in the Gateway area and then walked over.  I had no idea that they added a rooftop section on top of Newport Music Hall.  I actually played at Newport back in the day when I was in college.  Anyway, the former Panini's now has a stairwell that has a nice patio up on top of the building.  Pretty sweet, but I am not sure if I would want to be up there with a hundred other people.  If I remember correctly they wouldn't even let people get to the balcony of Newport the last time I played there. 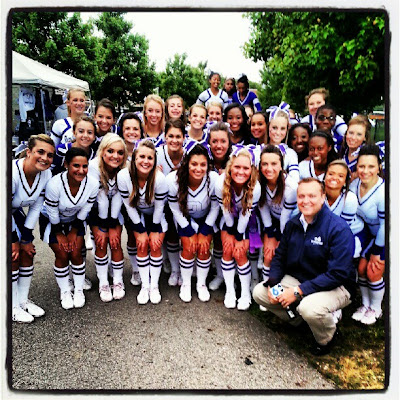 Yesterday I was at St. Francis DeSales High School football game for the game of the week.  It is always hard to try to round up people for our live shots two hours before the game, but I always manage to pull some strings and get a group together.  It was the homecoming game for the school's 50th year of having a football program.  On top of that, it was alumni night so I had about 40 cheerleaders for one of my live shots. 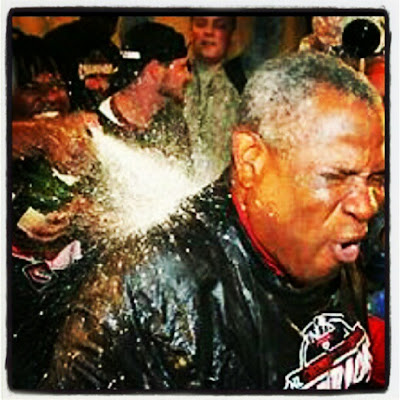 In other great news... the Reds clinched the playoffs... again.  I had to bring back this image for old times sake.  I was lucky enough to be asked by our sports director, Nathan Baker, to help out the night they clinched in 2010.  He had me as the photographer in the locker room and boy was it fun.  I was sticky for days... and so was the equipment.  I even managed to talk the intern into grabbing an empty champagne bottle for me as a keepsake.  Figured I would dig out the image with me and Dusty Baker that was on the Reds homepage the day after they clinched two years ago.  Hope they can last longer in the playoffs this time.

We had wind gusts over 50 mph today and luckily the cold front that came through is moving out of here and we are seeing the winds calm slowly.  The winds will calm down more heading into Sunday, but it still will be breezy with winds out of the northwest at 5-15 miles per hour.  There will be a mix of sun and clouds as well for the rest of the weekend along with cooler temperatures.  Sunday will start off in the low 40`s and only warm into the lower 60`s.  More sun Monday, but a chance for morning frost with low temperatures in the upper 30`s and highs back in the mid 60`s.  A chance for rain returns later Tuesday as we get back into the lower 70`s and that rain will stick around into Wednesday as well.  Our temperatures will not take a huge hit later next week as the system sticks around and brings another chance for rain heading into next weekend.  Hope you enjoy the cooler temperatures!  Have a good one!