We tied the high temperature record of 102 degrees yesterday... and that actually tied the record for the hottest day for June EVER since 1893 when the Dayton started officially recording the weather data.  Actually we may break a record this morning.  As of 4:38 AM we are still at 84 degrees.  The record for the warmest low temperature for this day is 80 degrees.  If we do not cool down below 80 we could walk away with that record.  I did a little research and for Dayton there has only been 6 days for the entire year EVER what we did not cool down below 80.  Think about that... we have always cooled down into the 70's or below every day for the last 119 years except for 6 days... maybe 7 this morning.  We will have to wait and see.  I will post an update to this blog at 9AM as to whether we broke the record.  I also have something else coming your way later this morning... so two reasons to check back in.

Earlier this week, in our post-show meeting I tossed out the idea and asked if anyone had a fun idea on how to "show" how hot it got.  Meghan Mongillo came up with the idea of putting things that melt in a car and have a competition to see what would melt the fastest.  We came up with lipstick, chocolate, and cheese.  The temperature in the car bounced up to about 170 degrees... CRAZY!  I will let you think about which one melted first... because the answer will surprise you.  I will post the final picture coming up at 9AM when I let you know if we broke the record or not this morning.

Well, I can sum up the week ahead with three words: Hot, humid, thunderstorms.  Yesterday was the dry heat with our high of 102 and humidity around 35%.  Today we will add the humidity and "only" warm into the upper 90's.  Humidity will not be going anywhere for the week ahead...staying sticky.  Our temps will be in the upper 90's for the weekend and then "cool" off into the lower 90's for next week.  With the humidity and temps so warm there is a chance for an isolated shower or storm every single day.  So we went from Arizona weather... hot, sunny, low humidity... to Florida weather... hot, humid, and a chance for rain every single day.  Stay cool this weekend and have a good one!  Make sure to check back in later this morning for the update.


~~~ UPDATE~~~
Sadly, we did NOT break the record for the warmest low temperature.  The record was a low temperature of 80 and we were on pace for it, but we briefly dipped to 79 degrees at the Dayton International Airport.  Well, we gave it a run for the money.  Well here is the photo of the Melt-Off from the morning show... The photo below shows everything after sitting in the 170 degree heat. So the breakdown of the melting: The cheese moved first and flattened out, then the chocolate started to melt, then the lipstick, BUT the lipstick was the first to stop moving.  The lipstick melted very quickly and was done while the chocolate and cheese was still moving.  As a matter of fact, the cheese started boiling and bubbling, so the cheese never stopped.  So cheese moved first, lipstick was done first... you pick the winner.  By the way, NOT eating any of it.  Have a GREAT weekend. 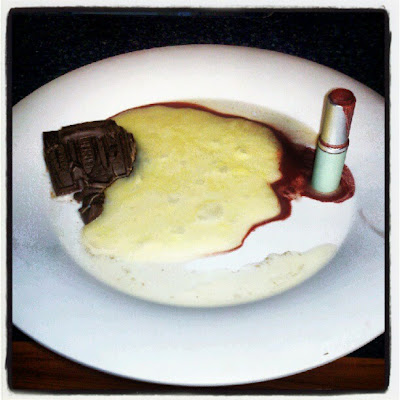 Posted by Andrew Buck Michael at 5:15 AM