Back to where we met: Derby Hall, Ohio State 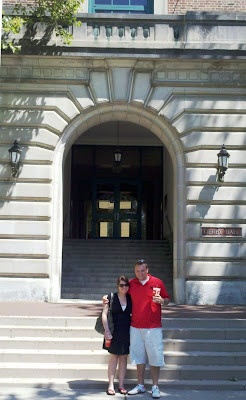 As I mentioned in yesterday's blog, Dawn and I went up to Ohio State Sunday for my brother's graduation. While we were there we stopped for a quick photo at Derby Hall. This is where we had our meteorology classes. We really wanted to get a few wedding photos in front of Derby, but time flies on your wedding day and we only had time for pictures at Browning Amphitheater, Mirror Lake, the north rotunda of Ohio Stadium, and Out-R-Inn. Anyway, we had to get that photo and since my other brother rode with us, we had someone to take the photo. 11 months later, ehhh, just imagine us wearing a wedding dress and tuxedo, haha. Also fitting, Dawn had Cane's beforehand just like our wedding day. (I had one of the groomsmen surprise her with it on our wedding day since it is her favorite place to eat)

Well, keep that garden hose handy. Other than a very slim chance for a spotty shower for the Eastern Miami Valley this morning, we will be dry for the rest of the seven day forecast. Champaign County had a quick pop-up shower about an hour ago, but things are already dry again. We also have a little light fog this morning with partial clearing and winds calming down just a little bit. The cold front should push through the area later this morning and early afternoon. Once that moves through we will see the winds switch to the north and then slowly clearing out for the next few days. Plenty of sunshine through the start of the weekend and then a few more clouds will start to roll in Sunday and Monday, but any rain looks to stay just west of here. We will likely see rain the middle of next week, but nothing until then. Our highs the next few days will be near 80 and then mid-upper 80's for the weekend so the heat will be returning. Watch out for that fog and have a good one!