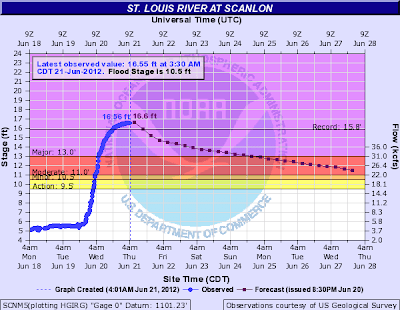 Talk about a crazy 24 hours for those in Duluth, Minnesota. A cold front stalled out into a stationary front yesterday over Northern Minnesota late Tuesday into early yesterday. Storms dropped over ten inches of rain in a short amount of time and the St. Louis River, that runs just outside of Duluth, has already reached a record height. The river went from 5.5 feet deep to 16.5 in about 24 hours and shattered the record by nearly a foot. Quite crazy how things changed so quickly. That front is now moving our way and will bring us cooler weather and a chance for rain later today, but not nearly as much rain...we will only see scattered showers and storms.

We will start off with plenty of sunshine for today with more clouds later. I think most of the rain will hold off until at least the late afternoon into the early evening. We will warm back to 92 for the high then highs in the low-mid 80's for the next three days with dry conditions after tonight. Another chance for rain Sunday night into Monday morning will cool us back into the mid-upper 70's for the first half of next week. So a two step cool down. I think our chance for rain tonight is still marginal for the entire area seeing the rain. We are nearly 6" below normal so we really could use as much as possible...and Monday's rain is looking even less than today since we will be drying out the atmosphere with lower humidity this weekend. At least we will be seeing a break from the heat. Stay cool and dry today and have a good one!