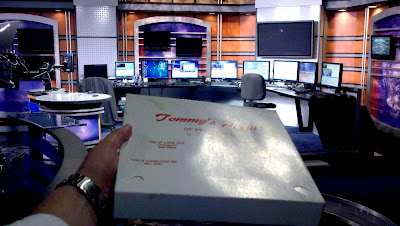 This entry is coming your way, again, from Columbus, Ohio.  They are a little understaffed so they asked if I could come and help fill in.  I love Columbus and miss living here so of course I am willing to help out.  I filled in last night too and did live weather reports from BIA Parade of Homes in Lewis Center for the dinner time shows.  I did not see Dwayne Hoster there though.  I then helped my brother move out of his apartment.  He is a neat freak and I am sure excited to get out of the dirty college house.  We grabbed lunch at Tommy's pizza and I had the rest for dinner.  I do miss the food around campus, but I am sure I would need to hit up the Olentangy Trail a lot.  Anyway, just wanted to say hello from Columbus.

There were a few storms in Dayton and the Miami Valley earlier today.  The heating had finally broke the cap in the atmosphere and if you were lucky enough to see one of the storms you likely saw a decent amount of rain.  Some spots saw over an inch in a short amount of time. More storms are expected for tomorrow as a weak cold front tries to push through.  I use the term weak because temperatures will not take too much of a hit.  As a matter of fact, I expect to be in the low 90's for much of the middle of the week.  Next weekend it does look like we will see a slight cool down, but hot until then.  So storms Sunday, mainly late morning and early afternoon, and a possible lingering shower Monday...then dry til the end of the week.  I am going to be interested if we get any pop-up showers in the middle of the week because of all the heat though...  See you all back Monday morning...back to work.  Happy Father's Day & have a good one!