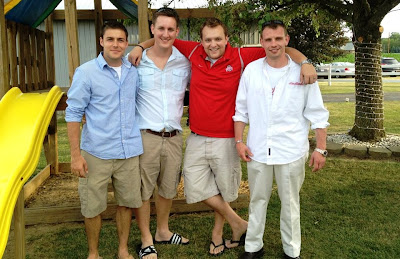 I know my weekends seemed filled to the brim... sometimes overflowing... this weekend was much of the same. Friday I took a nap to adjust my body to staying awake later. I then went down to Middletown to pick up a new intake for my Polini. One of the DAM Riders owns a body shop and he does AMAZING work. I picked up some pipes for us to make intakes and he did not disappoint at all with the intake he made...more on that shortly.  After picking up the intake, Dawn and I then went out to dinner on the patio at TJ Chumps and then joined a bunch of co-workers as we sent off Chris Cerenilli on his future endeavors.  Fun night.

Saturday I mounted up the new intake and boy is it sleek. 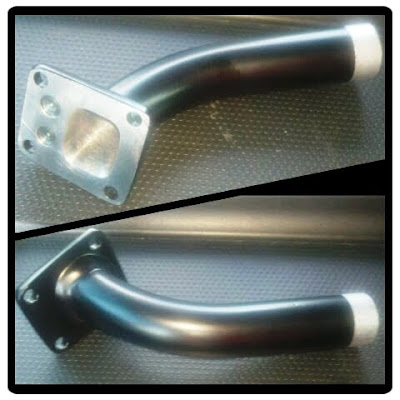 The new carb location is kicked back at a very low angle and I am still using the Polini two pedal reeds since that is how the cylinder is designed for the high velocity intake flow.  So many people go with the four pedal reeds, but then say that they lose some top end.  Love the new sleek look and I did notice a decent amount of power gain, but I up-geared to keep my RPMs lower since my points have been floating when I am screaming over 10,000 RPMs... Still looking to get that tach to accurately know what RPM I am actually getting. 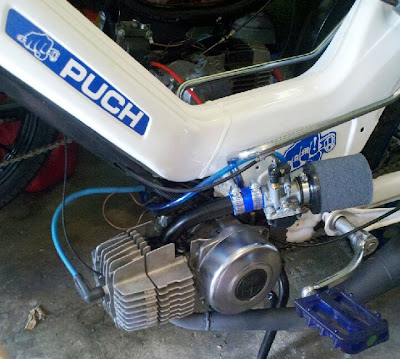 I mocked up my Maxi and took it around the block then I had to get ready to head back to the farm.  My sister needed her Puch Maxi moped fixed.  Based on what they told me on the phone I tried explaining to them what the issue was and how to fix it.  They never got around to it and it only took a couple minutes to fix.  I spent a few extra minutes to give her bike an all-around check and after that... time to ride.  I talked my sister and my parents into taking it for a ride on the country roads.  It is surprising that she can get four more miles per hour out of the bike than I can... just because she is so light.  (I used a GPS to track the max speed)  It was a lot of fun watching my parents ride her moped... my mom was a little frazzled, but my dad couldn't stop smiling and commenting about how smooth of a ride it was compared to my brother's Tomos.  I loved hearing that because I dislike Tomos mopeds.  Puch, for the win. I fixed her moped, hung out with the fam for a little bit, and then went over to one of my friend's couples wedding shower.  I went stag because Dawn has been so busy at work that she had to work Saturday.  It was great to catch up with old friends and I was asked to give the toast for the soon-to-be married couple.  They are getting married in Vegas in a month and I have to work and will not be able to make it.  I was able to get a dragonfly to land on my hand while I was there.  Not sure if that is a sign of awesomeness or if the little guy was asking for rain. 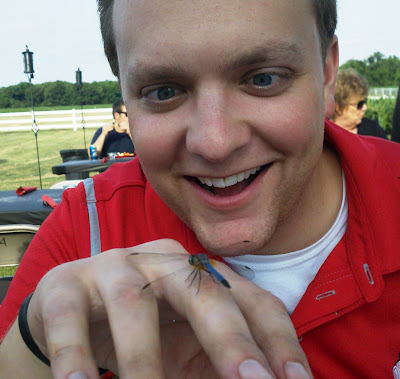 Sunday I went down to Cincinnati to ride mopeds.  One of our members of the DAM Riders (Dayton Area Moped Riders) lives all the way down there and he wanted to host a ride.  It turned out great, but hot.  We had nine riders and enjoyed the ride on the rolling hills that Cincinnati has to offer. Naturally, we had to get a photo of the bikes when we stopped by the river.  Fun times with fast bikes. 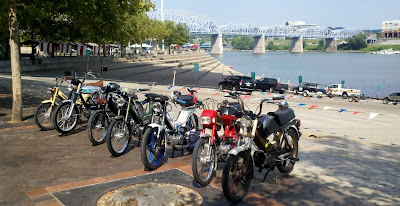 Yesterday we warmed up to 91 for the high at the Dayton International Airport, but we will not be near that at all today.  A cold front is moving through currently and that will keep our temperatures from warming up too much today...only up to 78 for the high.  The morning clouds will clear out for the afternoon as well.  Plenty of sunshine for the upcoming days as we start a warming trend.  80 for the high tomorrow, 87 for Wednesday...then...97 Thursday and 98 Friday... yes, you read that correctly.  The heat will really pump into the area later this week and it will feel closer to 100 with the humidity by the end of the week.  There will be another cold front by later Friday that will cool us off a little for next weekend...with highs for next weekend...about 90 degrees.  So not really cool at all.  Enjoy the cool temps while they are here.  I know I will be opening the windows to our house to let it air out before the AC works non-stop later this week.  I guess the heat is fitting since we are exactly six months away from Christmas.  Enjoy the sunshine and have a good one!