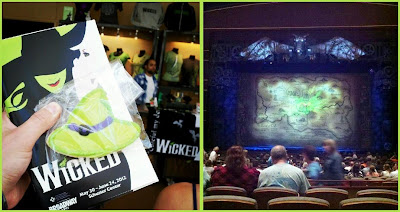 I was lucky enough to go and visit the Schuster Performing Arts Center yesterday with Dawn to see the Broadway musical Wicked. I asked Dawn if she wanted to go see the play and she yelled "YES!" She had seen the play several years ago and I had always wanted to see the musical. A little side story that I have never told you on my blog here. I was the President of Drama Club in high school. I have been in ten plays, two of which were musicals. I still got the knot in my throat when they bowed at the end. I get excited after a great performance and the bowing at the end is such a great feeling. As for Wicked: wickedly amazing! The crew and cast were fantastic and the talent of the cast was unbelievable. It was also my first time in the Schuster Center as well. I have been in the Victoria Theater and we are VERY lucky to have such a nice facility and devotion to the arts here in Dayton. I HIGHLY recommend seeing Wicked before it leaves town in mid June.

Witches would melt on a day like today...(see what I did there)...quite a washout with non-stop rain this morning. The Northern Miami Valley has seen the least amount of rain with around or just under quarter of an inch. The Southern Miami Valley is still climbing in and over that one inch range in a few locations. The rain will continue pushing north and then eventually pulling off to the east through the first half of the day. We still could pick up half an inch of rain, so a nice soaking. We need it. The low pressure system will park over Northern Michigan this weekend and we could see a few wrap around light, spotty rain showers. There is only a slim chance and Sunday is looking like the drier of the two days this weekend. A stronger system Monday will move through with a better chance for rain and kick all this out of here for drier conditions for later next week. Temperatures will be rather cool the next few days with a high of 63 day, 69 Saturday, and 74 for Sunday. We will top out in the mid-upper 70's for much of next week so right where we should be for this time of the year. Stay dry today and have a good one!