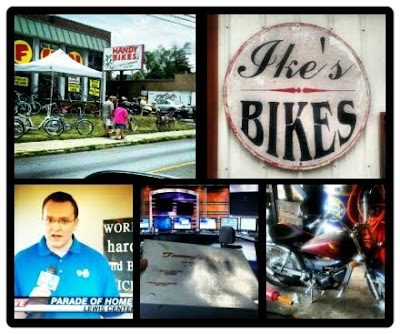 For anyone who didn't catch my special blog entry from Saturday, I was in Columbus much of the weekend. Our sister station needed some help so I helped them out to give a few of their meteorologists a day off since most of them have been working six days a week. I also passed by Handy Bikes in Columbus. I am pretty sure BJ doesn't work there any more since they sold all their moped inventory to 1977 Mopeds. BJ was such a great asset to the Ohio moped scene, and the entire country overall as well, since he spearheaded the legalization of several moped brands in Ohio and imported them. I have stopped in to see him a couple times over the last few years and it was a little sad to know that they only specialize in bicycles now. Sunday I drove down to Ike's Bikes in Georgetown, Ohio to pick up a Puch Maxi for a friend in Cleveland. Ike also has a long standing reputation in the Ohio moped scene. He bought the entire inventory of Montgomery Cyclery a couple decades ago. 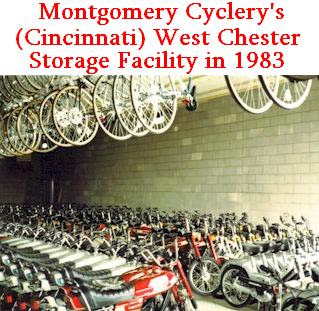 Here is a photo of of all the mopeds they had back in 1983 before they sold everything out to Ike. Ike is a pretty rad dude who had a few bikes that were amazing, still in his possession. He has a 1980 Puch Magnum MK II with only 44 miles on it. Absolutely beautiful! He also has a Tomos Revival with a Honda Goldwing gas tank. Complete with front pegs and all...this bike looks like an amazing ride. I picked up the Maxi for my friend and even bought a few NOS Puch parts he still had...condensors, points, springs...ya know...the little stuff that is hard to find New Old Stock...plus he made me a great deal on them. Quite a fun little weekend followed by a much needed Sunday nap.

Today we are going to see pop-up showers and storms. Even this morning, at 5:30AM, the atmosphere is unstable enough for a few showers popping up. This afternoon, as a warm front lifts through the Ohio Valley, we will see the showers intensify into a few storms. Not everyone will see the rain, but for those that do see it, will deal with a decent soaking....as a matter of fact, the lightning tracking just started picking up some lightning. The rain will leave later tonight as high pressure moves in and HOT conditions. Our highs will be in the lower 90's for the next several days and the humidity making it feel like the mid 90's. More rain later Thursday with a cold front arriving cooling us off a little heading into next weekend with highs back in the mid 80's. Gotta get back to tracking the showers and storms. Stay dry and cool...and have a good one!