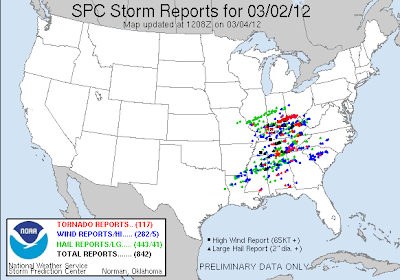 To say that we lucked out here in the Miami Valley is an understatement. In my blog updates from Friday it was quite clear that areas to our south would have the best chance for more severe weather. Sure enough, JUST south of our viewing area the atmosphere let loose and ripped up peoples homes and lives with tornadoes packing winds over 200 mph. In all on Friday there were reports of over 115 tornadoes, but luckily we did not have any touchdown here in the area, just a few tornado warnings for rotation tightening up within a few storm cells. Jeff Booth and I were on-air for about 50 minutes with the warnings, but again, we dodged a bullet. My thoughts and prayers goes out to those to our south that are left to pick up the pieces. 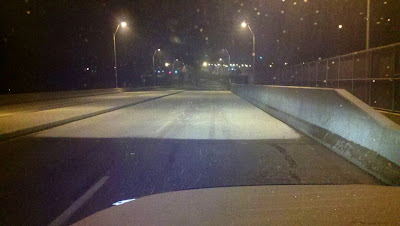 One thing not helping them pick-up is the snow. They will be seeing 1-3" of snow just to our south, but here in the Miami Valley, only about a dusting. I had to brush off the dusting this morning and the roads were not tooooo bad, but the bridges were ice and snow covered. The ground temperatures kept the snow from sticking, but where the air can get under the bridge it really helped the snow stick. There are reports on the scanner of dozens of spin-outs on the highways, so if you are reading this before leaving the house, be careful.

The snow should end shortly and maybe only a flurry or two for the first half of the day then a little clearing and cool, high 36. Mostly sunny the next few days as we warm into the 50's and maybe even 60 by Wednesday. Rain returns later this week with highs in the 50's and then mild for the weekend and looking to stay mostly dry. Back to the forecast and tracking all of these accidents... Just heard 75 N and Edwin C. Moses has a three car accident, a police cruiser spun-out, and even 2 jack-knifed semis... gonna be a crazy morning...good thing I cranked this out already. Drive safe and have a good one!