The builds are moving along pretty well. The bikes are soooo much lighter when you remove the motor. Both motors were in great condition and runners before I started my rebuilds. They were a little dirty, but that will be addressed during the rebuilds.

This was first time I cracked the case on the Metrakit motor and as I said before, the case was not case matched to the cylinder very much, so there was a big performance lacking due to that.

My wife was out of town Saturday for a few hours so I took that time to take put on new bearings on my gears and cranks. Things went VERY smooth and no major issues at all....heat the bearings, freeze the cranks/gears and you are golden. I also started the case matching on both the Polini and Metrakit cases.

My good friend, Sam Babcock, made me this awesome engine case stand. It worked out great while case matching with both halves together standing upright, but the bolt holes also worked out perfect to put the case on its side when I needed to fine-tune the case matching. The fact that the steel is nearly half an inch thick on the stand means that it isn't moving anywhere, even without bolting it down. 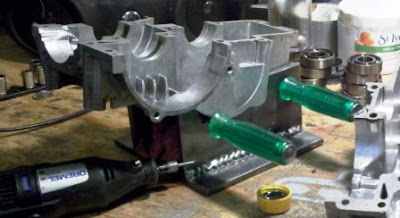 Love this little stand. After trying to port or case match before without a motor stand I know both sides of the fence and using the stand works out great. 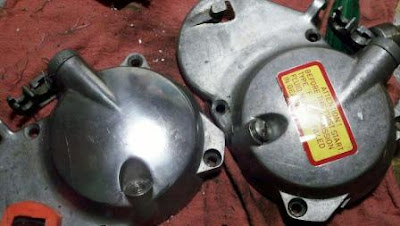 Since the cases are nearly complete I figured I should try to clean up the rest of the case. I tried shinning up the clutch covers and it looks a lot better with the new shine instead of the 30 year old scuffs. I doubt I will get it to shine like new, but at least it isn't as scruffy.

I have been focusing part of my time on the engines and other cosmetics on the bike. Since these bikes will be bikes that I plan on keeping forever, I wanted to make sure they are getting the top-notch treatment. I wanted to run a temp gauge to make sure I am not seizing. The speedo is essentially useless because I keep snapping the speedo cables by going faster than the speedo can handle. I plan on running GPS for speed through the Mag Dash bolt holes and this means I could play with the speedo housing. I chopped off the back side of the metal cup, trimmed some excess and flipped it inside the cup to mount the temp sensor. I also had to cut a little bigger hole in the speedo front plate for the sensor and luckily the odometer hole was the proper width, just had to raise it. I do need to clean up the back of it a little and plan on running a piece of wood or steel to stabilize the gauge a little more. One done, one to go for my other bike. So the bikes are slowly coming along. It is kinda hard to tackle two full builds at the same time, but I hope to have at least one bike, Magnum, finished within the next two weeks.

The weather looks great for today. We will get into the mid 50's today with plenty of sunshine and then 60 for the high tomorrow with a few more afternoon clouds. Rain returns Thursday and then highs in the low 50's for the end of the week and start of the weekend. Another round or rain looks to return to the area by early next week, but the timing on that system is a little hairy. Models can't agree yet, so I am not pulling the trigger yet because I am not confident in the timing of that system...but at least it does look like we will warm back into the upper 50's by then. Enjoy the beautiful weather and have a good one!