Hail of a good storm 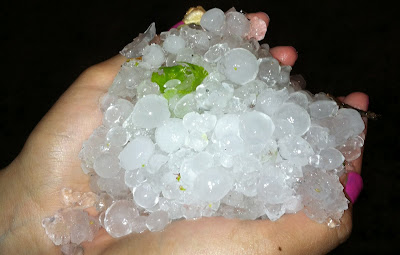 Yesterday turned out to be a very warm afternoon, but the storms started firing up around 6PM and lasted into the overnight hours. We had some large hail in Preble County and A LOT of it. This photo was sent in from Mary in Eaton, OH. The largest hail reported was 1.25" from several people in the area, while most of the hail was less than an inch. We had a lot of photos sent in of hail-covered decks and hand-fulls of the ice balls. Luckily no major damage, but we could be in for another round of storms tomorrow.

It was a rather quiet weekend around Dayton. Luckily no tornado warnings Friday so I did not have to come back into work. Dawn and I went out Friday for a going-away party of a co-worker, Scott Bartles. He was our assignment editor and a really great guy. We also met him Sunday for lunch at Sammy's El Pueblo in Springboro for some AMAZING burgers. After the going-away party Friday we went down to Blind Bob's and watched a fellow moped rider play his last show in Dayton before moving to Illinois for his job relocation. Saturday was pretty laid back and Dawn and I hung out at home and then went out to watch the Buckeyes game at Roosters. While I am sad to see them lose, at least they will not be trampled by Kentucky tonight. Kansas has no chance. Sunday we had lunch with Scott then watched 21 Jump Street. It was nice to have a laid back weekend and just relax; haven't had that in a long time.

A few light showers are possible today, but we will clear out later this morning. The early morning rain will be rather light and very spotty. We will see a chance for scattered storms late Tuesday into Wednesday, but then dry out just in time for Opening Day for the Reds and Dragons on Thursday. Rain will be just south of the area on Thursday so we could see a few clouds from that. Staying dry heading into the weekend and temperatures will slowly warm. As far as temperatures, 67 for the high today, 77 Tuesday, 64 Wednesday, then cool Thursday with a high of 57. Back into mid-upper 60's next weekend. Seasonal after a VERY warm March. Dayton averaged a temperature of 53.6 for March, which was 13.2 degrees above normal and the warmest March ever. April is not looking nearly as warm, but I am not going to complain too much about that. Have a good one!