Are the Reds the new Yankees? 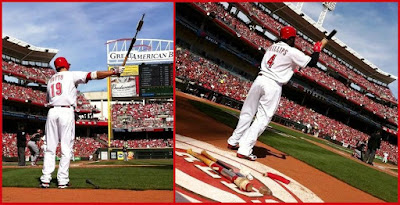 How about this?! Reds signing two key players for long-term and for a significant amount of change. Votto was first to get signed for another 10 years for $225 million. Yesterday they agreed on a 6 year $72.5 million deal with Brandon Phillips... so in less than a week nearly $300 million spent on two players. The Reds are spending money like we have an unlimited amount...almost like the Yanks. As a Reds fan I LOVE that the owner is finally getting behind the team and investing in the future. While these two are a HUGE part of the team's success, I hope the rest of the team can feed off of this and realize that we are serious about winning and not focused on farm prospects. I have not been to a game yet this year, but I am planning on going in two weeks. I am super excited and love an evening, or afternoon at the Great American Ballpark. Special thanks to my good pal and former co-worker Brad Underwood for the photos. (His work assignment last week: attend and report on Opening Day...lucky)

On to the weather... great ready for a cold morning. Temperatures have dipped down to 28 at 4AM at the Dayton International Airport which would be the coldest in over a month... we dropped to 22 March 10th. We will warm up into the low 50's today with a mix of sun and clouds with more sunshine tomorrow and warming into the upper 50's to continue our warming trend. More clouds by Friday with temps into the mid 60's and then 70's for the weekend...BUT rain returns. Scattered showers and storms this weekend. The system slowed down a little so later Saturday and Sunday looks to be the best chance for a scattered storm this weekend. They will stick around until Tuesday as the system kicks out of here followed by cooler weather for the middle/end of next week. I guess enjoy the sunshine before the wet weather returns. Have a good one!

Posted by Andrew Buck Michael at 5:13 AM