It has been three years since I was riding my moped around the glorious city of Louisville. I love attending their moped rally, Whiskey Business, put on by their moped branch, Bourbon Bandits. I also love the Bandits. They may not be known to build the cleanest, shiniest bikes, but boy can they make some fast, fun, furious mopeds. So if you are heading down there for Thunder Over Louisville, the largest fireworks and air show in North America, be on the look-out for a few hundred mopeds flying by too. You may catch me with a grin from ear to ear. 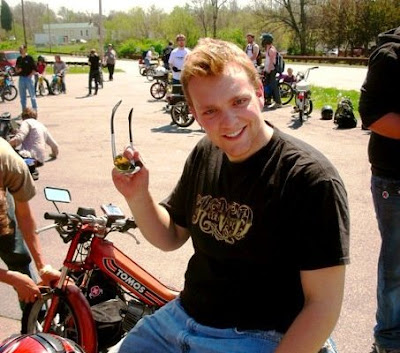 The weather right now is a little iffy next weekend for the moped rally. The forecast models are showing a chance for showers and storms next Saturday, the 21st. I will be keeping a close eye on that in case the rally will come with rain.

Closer to home, here in Ohio, we are dealing with temperatures just below freezing again this morning. The good news is that with plenty of sunshine we will bounce back into the upper 50's later today and then mid 60's tomorrow. Rain rolls in early Saturday with a few showers and storms. Temps will be topping out in the 70's for the weekend, but we will deal with a scattered rain on Saturday and maybe a lingering shower or two to the far north Sunday and Monday. The system will pull back south on Tuesday bringing another decent chance for rain, but then drying out by Wednesday and cooler with highs back in the mid 50's.