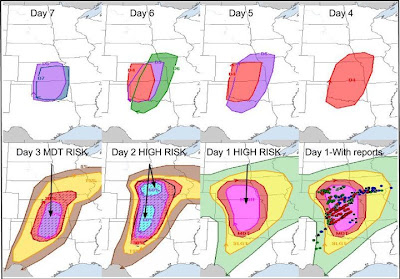 It is always important to give credit where credit is due and the Storm Prediction Center with the National Weather Service knew that Saturday's storms were going to be pretty nasty, a week out. There were a lot of factors coming together, but the key part was the jet streak within the jet stream, and sure enough when that arrived into the overnight hours, BOOM. A jet streak is an embedded region within the jet stream that has winds much faster than the rest of the jet stream. When this rolls through the upper atmosphere, it can add extra lift, rotation, and ultimately more instability. SPC had been calling for the chance for the storms a week out and kept with the chance for severity. It is just amazing how much more accurate the forecast has gotten over the last few decades and even years... if only we could get rid of the negative stigma. I think I heard three more "weather man" jokes over the last few days. I laugh and nod my head, but think to myself... "If I wanted to be 'wrong' and get paid A LOT more, I could have been a due-date doctor for expecting mothers.... I think they only get the date correct 4% of the time...." Haha... oh the things that go on in my head... Anyway... I thought I would share this and offer my kudos to those at SPC and all the hard work they put into the forecast over the last week.

The winds are just slightly strong for fog this morning. If the winds would be under five miles per hour then we could start to see a little fog, but winds are about seven or eight miles per hour. Mix of sun and clouds today with a high of 63 and then much of the same tomorrow as we get into the upper 60's. Partly cloudy Thursday warming into the low 70's and low 70's again Friday before rain arrives later in the day. The system is slowing down a little so we could be dealing with more rain on Saturday, but I am hoping the system doesn't stall out and leave rain on Sunday too. The models have been hinting at the possibility of that happening. Temps will cool down to near 60 for highs for the weekend and early next week, if not slightly cooler. Well, back to the show. Have a good one!