My entire weekend was great. To finish off the weekend I finished a 35 mile moped ride Sunday with the moped that was down for the count on Friday. I guess we should start with Friday... HUGE NEWS! 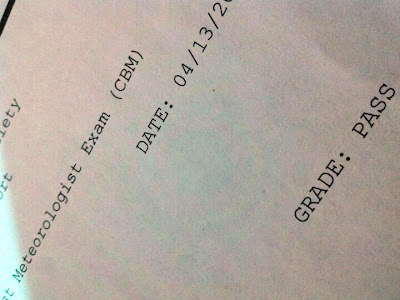 In my blog I have been talking about studying since last Fall for the Certified Broadcast Meteorologist exam. I took the exam in late December and the test was not only a test examining my knowledge, but my riddle skills by some of the tricky wording. I barely didn't pass in December, but I took the test last Friday...the 13th... and PASSED! WOOOT! The topics I really hit hard the last two months studying were barely on the new exam...(new questions), but at least I passed it. So happy to have that done and over with... now I need to send in three video forecasts for the American Meteorological Society to critique, but from what I heard, they only approve about 50% of people the first round of videos.... and it takes close to 6 months to hear back before resubmitting, so I don't have my CBM seal just yet, but it is only a matter of time.

Dawn's company had a VERY successful March so we had planned a dinner with her boss, which is her cousin, his wife, Dawn and me on Friday. It worked out great because we celebrated my test as well. Had a great time down in Cincinnati and somehow I may be treating next time when I get my CBM seal... not sure how that worked out or if that is true. Saturday was a pretty laid-back day since it was so wet and rainy all day. Dawn went up to Columbus to spend the night with her aunts and watch her cousin play in a basketball tournament. I visited my friend in Middletown at his car shop because he has some of the good ol' strong muriatic acid, aka hydrochloric acid. They only sell diluted versions now at masonry stores, and I needed the strong solution for my seized cylinder and piston. I need to pick some up for myself, but that stuff is VERY dangerous.

We used it to eat the aluminum on the inside of my cylinder and it bubbled away the smear. It cleaned up GREAT compared to the photos from last Friday's blog entry. We also talked about issues and problems with some of the high compression heads and the fact that their curvature is very harsh and not conductive to proper running so I spent the afternoon sanding down the aluminum head by hand. I taped off the seal on the head and used an old spark plug in the middle to keep from sanding the threading. Much smoother and will now disperse the combustion more evenly instead of directly back to the center of the cylinder. I finished that up and went to a friends birthday party in Xenia. It was a lot of fun hanging out with my moped friends with no moped riding or wrenching involved...yet.

Sunday I woke up, mowed the grass, finished the sixth load of laundry then went back out to Xenia for our moped ride. We grilled out beforehand and it was delicious! It was about a 35 mile ride and the guy leading the ride actually was the only one who broke down. His chain broke a few links away from the master link so his girlfriend came and they put the moped in the trunk of her car and finished leading the rest of the route. My bike's spark timing, set to 1.3mm BTDC, may have slipped a little because I was running pretty hot temperatures by the time we got back home compared to riding earlier in the afternoon. I also need to repack bearings in my front forks because I didn't put in a spacer above the top threaded nut to hold it solid... I thought I wouldn't need it, but the vibrations of the bike rattled it loose and I lost my bearings...haha. I need to find a local place that sells some 3/16" loose ball bearings. Other than that, bike held solid and is ready for the rally next weekend in Louisville. I came home and Dawn had dinner ready and we hung out for a few hours before I went to bed to start the workweek all over again. Great weekend and wished it could have lasted longer.

Forecast is looking pretty good for the week ahead. There will be two wet spells and the first is early this morning. Showers are moving into the Ohio Valley currently and will be off to the eastern part of the area by lunchtime so you will need to brace for the windy, wet morning commute, but later today it will only be windy... not wet. Skies will clear out tonight and winds will calm down. Add in the fact that there will be moisture left over from today's rain and we could be dealing with fog tomorrow morning if the winds calm enough. Mild and dry for most of the rest of the week. Mostly sunny and 63 for the high Tuesday, 67 and mostly sunny Wednesday and then clouds start to return. Warm on Thursday with a high of 71, but partly cloudy with rain returning Friday and a high of 66. Next weekend is looking dry, but cooler with highs in the mid 50's and even a chance for frost for the overnight hours. All in all, a pretty nice and dry seven day forecast after midday today...other than Friday. I will monitor any changes for the week ahead so stay tuned and I will keep you posted. Have a good one!