I have a small soft spot for Matt Light on the Patriots, but other than him, I would be seen rooting for the Yankees first...which will never happen. It was not very difficult as to who I would root for during the Superbowl and the Giants deserved the win much more. Back in college, during the spring, I was walking around the mall and they were having an AMAZING clearance on jersey's so I bought a Peyton Manning jersey.(I think it was only $15) I figured he will likely be a pro bowler in the future and I respect his game. Well I also thought if I wore one Manning jersey it would work for the other Manning, Eli. Haha, the game turned out to be a great match-up and the commercials were pretty decent as well with beer, cars, and snacks taking the main spotlights. Special shout-out to Springboro native, Jake Ballard, who now is a Superbowl champ. The tight end sadly was injured in the first half and spent most of the second half in the training room...still gets a ring though. All-in-all it was a great Superbowl and now I wait until the Browns make it there.... next year?!?! 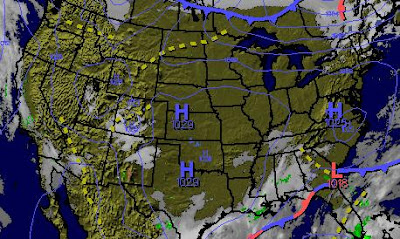 The weather yesterday was GREAT as well. As a matter of fact, there is VERY LITTLE wet action across the entire country. It has been a while since I have seen the US this dry with less than 1% of the country seeing any precipitation. Today we will get into the upper 40's with more sunshine. Tuesday will be a little cooler with highs in mid 40's and increasing clouds as the cold front swings down from Canada. Tuesday night into Wednesday we will see a few flurries, but as dry as the air will be, the cold front will not have much moisture to work with. Temps will cool down for the end of the week and by next weekend we may be lucky to get above freezing. The good news is that, other than the few flurries Wednesday, we look to remain dry over the week ahead. Enjoy today and keep the coat handy. Have a good one!