It was a pretty chilly weekend here in the Miami Valley, even a tad cooler in Michigan. The Dayton Area Moped Riders got invited to the Red October 7 moped rally. I shared my ride to the state up north with Sam. He came up to Dayton around noon on Friday and we loaded up our bikes in my truck and some of the Northern DAM Riders followed on our caravan ride up.

It was a pretty awesome ride up...got gas for $2.92. The only downside to Friday was the rain that moved in and cancelled our evening riding. We were able to hang out with everyone though and it was nice to catch up with old friends I haven't seen in about a year. Now that I am working weekday mornings I will be able to see them a little more often. We stayed at a friend's father's house and it was awesome. He opened his finished basement to about ten of us and we had a blast...we were intending to camp outside in his backyard, but they were awesome hosts.

Our chilly Saturday ride took us around the countryside around Ann Arbor and our halfway point was a cider mill...I filled up on my weekly dose of apples and cider. I ate the best caramel apple I have ever had. 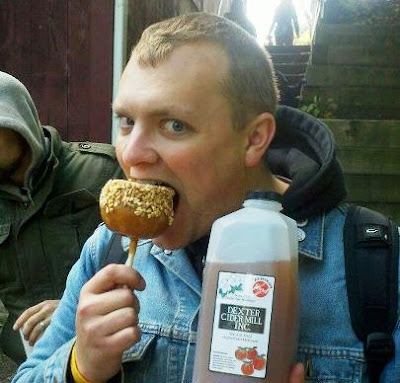 Since the rally was pretty small and almost invite only...it meant that the people that rode really knew their stuff with their bikes. I have been to several moped rallies and this was the least amount of bikes I can remember breaking down and thrown in the chase vehicle. The group was much smaller than other rallies I have attended, but still, only five bikes...pretty awesome.

The only DAM Rider to breakdown was Brandon. His bike was still running, just really slow and backfiring because of his new dual exhaust. Luckily he brought an extra moped and was still able to ride on Sunday morning to breakfast...Saline Inn, GREAT FOOD! It was a great rally and props to The Guns moped gang for really showing everyone a good time.

After a taste of late fall's chilly temperatures this weekend, we will warm up a little bit heading into the workweek. Mid 60's today and then warming into the mid 70's through the week. We will have a large, powerful high pressure system parking over us through the week, so no rain on the seven day forecast at all...weeks like this, I could take all year long. Have a good one!