We saw GREAT weather to start October. Almost two weeks were dry with temperatures well above normal...and it looks like we are about to make up for that. Over the next three days, parts of the Miami Valley has a shot to see over two and half inches of rain. Most of the area has a decent shot to see at least an inch, but isolated spots could see much more...it all depends on how the showers are tracking from day to day, so be prepared. On top of the rain, we will be dealing with much cooler temperatures. We will spend most of the next few days in the 40's and MAYBE get into the low 50's...much chillier compared to the 70's & 80 we saw just two weeks ago.

In the moped world there is a saying that once you get moped that has a variator then you never go back. Well I did a moped trade and I now have a variated moped, a Honda Hobbit PA-50 II. I agreed with Dawn a long time ago that my limit is three mopeds, so I had to part with one of my other mopeds. It is a very sleek black bike that is completely original and stock. For those of you who do not know what a variator is, or how it works, here is a diagram I found online: 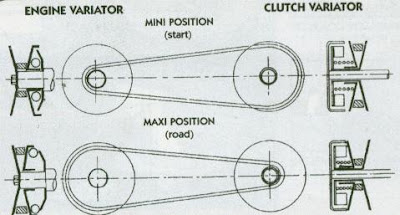 It is belt driven and there are weights that spin and when the speed of the variator is increased the weights want to spin out and thus changes the gearing ratio of the belt. So when you give it gas from the start it turns the rear wheel with more ease (faster start) and when you get your speed up then the weights spin out and thus give you a higher top speed.

My initial thought is that I kinda regret doing the trade. My old stock Puch Maxi was very reliable, however people rave about the reliability of these Hobbits. I cleaned the carburetor over the weekend and it took me a couple hours to completely dismantle the sub-frame from the rest of the bike, just to get to the carb.

Now that I have been riding it a few days, it is pretty reliable, fun, and smoooooth ride, but a little more sluggish than I thought. Maybe a little work needs done to the variator weights, but I assumed that starting from a stop it would be a little quicker, however, it is the slowest of all my bikes. Once I give it gas it takes a second or two to get going. I have to pedal a little bit for it finally to really take off. I imagine with a little work to it I can make my stock bike run a lot better. Thanks to Peter for his help with his blog entry, Peter’s Formula: The Buddy Hobbit. Peter really knows his hobbit stuff and since I am about a year or two behind him, I will be taking any tips along the way. I have a few other friends as well that have tested Hobbits, so I will be able to play off their knowledge...thanks in advance, guys.

On to the forecast! Very chilly over the next few days as I eluded to earlier in the entry. Most of the next few days will be spent in the 40's and rather wet with a couple inches of rain possible. Still a slight chance for a flurry or two to the far north and west later Thursday as the coldest of the air punches into the area. The weekend is looking milder with highs in the upper 50's and dry, but rain will be on the way for Monday. Try to stay dry and as long as we get through the next cool, wet days...the weekend, not looking too bad. Have a good one!