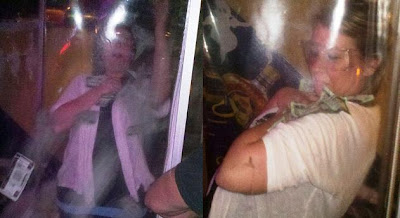 Scrooge McDuck would swim in his money, well Dawn kinda got to experience that this weekend. Her parents were in town visiting. We hung out at home and grilled out Saturday, watched a HORRIBLE Buckeye football game, then went out. Speaking of the game, what is up Bucks!?! Four unanswered touchdowns? We had that game in the bag. Anyway, we watched the first half at home, then went to her cousins house for the second half. Then I drove us, DD, to Julia's night club so the ladies could dance and her dad and I would occasionally attempt to look like we knew what we were doing on the dance floor. After we arrived, they got their drinks and in less than a couple minutes of walking in the door, they called Dawn's raffle ticket number. We had no idea that she got to go in the money pit with the dollar bills flying everywhere. She ended up winning $81. One of the security guards said that is the most he has even seen and she was the first person to get the $20 bill. That helped buy me a few energy drinks to stay awake. I gotta say, with my morning schedule, it is very difficult to stay awake Friday and Saturday nights without a nap. I am getting so used to waking up at 2AM that staying awake until then is almost impossible without some caffeinated help. Sunday we went to Ikea and showed her parents the crazy awesomeness that it has to offer.

Well the weather last week and over the weekend was FANtastic. The leaves are almost peak here in the Miami Valley, but I think next weekend we will be seeing full color. Today will remain mild and dry, getting into the upper 70's for highs. Later this week we will be dealing with rain. There is a very slight chance for rain Tuesday for the Eastern part of the Miami Valley. Wednesday will also have a slight chance for rain to the west as our next system rolls through. It will keep us cool with highs in the 60's for the end of the week and our best chance for rain will be Thursday. Maybe a few early showers Friday, but next weekend is looking great.