Pulled over on my moped 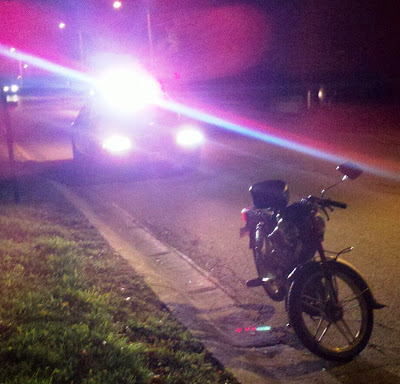 Yesterday was a fantastically beautiful day. Even though I just spent the past weekend in Michigan at a moped rally, I couldn't pass up the nice weather and got together with seven others for Moped Monday in Oakwood last night. We grilled out, wrenched a little, and then rode around the neighborhood. He has some really awesome roads for riding. I really think we need to add some of the route on our next big ride when people come to town to ride with us. We had a few issues on the route, flat tire and bad wiring on two bikes, we fixed those at one of the DAM Rider's house. We then rode around Washington Township and then I had to break off to get gas, grab some Qdoba burritos for Dawn and I for dinner, and then head home. My taillight went out and I put on my battery powered taillight so I was still visible. My brake light worked fine, but the taillight likely blew when I was zooming down a hill and the RPMs overpowered the light.

I was on my way home and instead of taking main roads I wanted to take the side streets just to be safe and avoid the heavy traffic. I noticed in my mirror, headlights that likely looked like a police cruiser behind me, I turned around after a stop sign and sure enough, it was a local police officer following me. He followed me a few more blocks and then finally turned on his lights and pulled me over. He was concerned that my LED battery powered taillight was not as visible. The brake light still worked, but he was worried that I might be rear-ended. I told him I am a very defensive driver and that was why I was taking back roads with next-to-no traffic because the light was out and I was running off of my battery(which was still very bright, but just small). He understood that I was being proactive and after running my license, we talked a little bit about my bike and how he rides motorcycles, and he let me continue on my way, just told me to be careful. Burritos lost a little heat, but were still delicious when I got home.

Well, more sunshine today, the seven day forecast for all of Ohio will be highs in the 70's and no clouds for almost an entire week. Who can complain about that? I would almost have to say that it will be MORE than great. Have a good one!