The Storm is Packing Up

We are now on the tail end of things and despite a dry break in the middle of the day for much of us... the end of this storm had its hardest punch.  I was out and about all morning and the roads were still fairly decent, but tonight I drove home for dinner real "quick".... well, let's just say they were anything but decent.  The early evening hours have had a pretty good clip of snow falling across the entire area and the roads that I took home were not cleared at all, about an inch and a half more than when I got to work.  Several counties have already issued snow emergencies and a plethora of school delays are already filtering into the newsroom.  The winds will continue to pick up overnight and persist into Monday, about 20-30 mph with higher gusts.  This also could set up a few bands of lake effect snow.  I expect about 1-3" more snow overnight, however blowing snow make it appear that not a lot fell.  The temperatures have fallen into the teens so it is a very fluffy and dry snow, meaning it will blow and drift easily.

We will see a break in the middle of the week, but another system looks to swing down from Canada on Thursday.  The latest models have shown it scooting by just to our south, but if its course changes, we may be in for a few more inches of snow.  I will keep this updated through the week, so travel safely, and as always, have a good one! 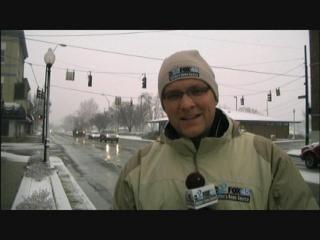