Well 24 hours later and now we are seeing things change, quite a bit.  I attached a picture of yesterdays models, which are faded, and the most recent models on top and much brighter.  If you are color blind, I hope you still can get the idea. So here is how it all breaks down, the ONLY model that still has a lot of snow for us is the 18z, which is 18 hours old right now, so you can throw that out the window for the most part.  All the models yesterday were showing the Low originating near the AK/MO Mississippi River intersection and riding up the Ohio River.  Well now that we are getting closer, the models still show a weak area of Low Pressure there, but the dominate Low now originating near the hump in Iowa along the Mississippi....MUCH more northern.  THIS is the reason why snowfall forecasts should not be issued this early... It only took 24 hours and we are going to see much less snow if we stay with the more northerly tracks.  They all track near or north of Chicago and through Southern Michigan.  This means we could see light rain starting later Saturday, Saturday night, and maybe not switching over to Rain/Snow until early Sunday.  I would say at this point we are only looking at a few inches of snow.  The farther north you live, the more snow, the farther south, the less.  We will still need to wait and see, but no numbers for now.  Sunday will still be bad on the roads, as the snow starts to fall and the Low moves east, the winds will pick up and get VERY strong, so any snow will be blowing all around and causing problems.  It only takes an inch or two if the winds are strong enough to really start to see drifting/blowing snow problems.

If you really wanted a lot of snow, there is still hope the system will shift south, but hope for that is fading as we get closer to Saturday.  See ya back on here shortly with another update.

PS.  Our weak clipper on Friday will bring about a dusting to an inch to the north, and even less to the south.... Meant to mention that, but got too focused on the big changes for the weekend. 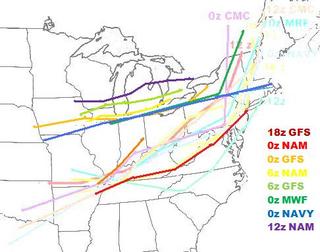