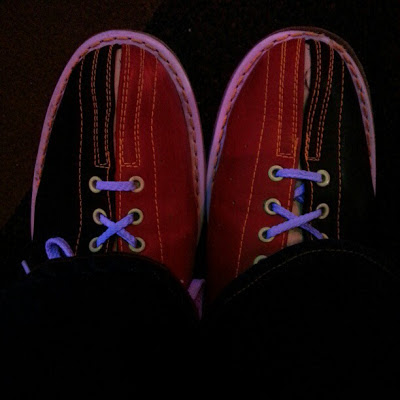 Bowling isn't a sport of strength and force, as much as it is about finesse.  With that said, bowling and forecasting have a lot in common.

To help make this analogy a little clearer I will compare it to this weeks forecast.  It should be pretty quiet for now until next weekend.  The three latest models have all been agreeing on the Miami Valley seeing the most snow we have seen this year in one system arriving for Saturday.

Now to the comparison.... I imagine the bowling lanes (60 feet) equivalent to two days of forecasting.... The first half of the lane (30 feet) is the first day, you can pretty much know when you release the bowling ball that it will stay in the lane.  When you start getting to the second day, or the second half of the lane, things start getting interesting.... normally it will stay out of the gutter and knock over a few pins.  If you are lucky and your forecast is spot-on, you get a strike.  Now imagine all the angles you could throw the ball, you threw it down the lane and not sideways, and for the most part hitting at least one of the pins is reasonably do-able, if not a few pins.

Now comes the fun part.... Imagine, if you will, taking that lane and doubling its length... now you went from 60 feet to 120 feet.  A bit more challenging then right?  You bet!!  The ball may have a little hidden momentum that may catch you and the ball off guard and send it into the gutter right before you hit the pins.  With that said, I would wager with enough practice 120 feet would eventually be successfully completed but still remain challenging.

So we took a look at extending the forecast to 4 days, now what about the snow system we got coming in 6 days????  That would make the lane 180 feet.... woah!! I am pretty sure that even the best bowlers in the world would tell you that it would be pretty challenging to hit a strike.   Sooooo,  lets compare this to the last three model runs of the snow system coming on next Saturday.  The last three model runs have been in pretty much agreement that we will see several inches (3-6 inches) and you could bet to wager that we would at least knock over at least one pin at that distance with the consistency you have built up.

Now the tricky part comes in.... if we shorten up the lane by a day or two (30 or 60 feet), do you think you could still knock over those same pins?  Will there be some previously unforeseen momentum or oil on the lane that may make it slip off course?  One thing is for sure.... If you were bowling at 180 feet, I am betting that you would take up the ball and throw it again when the lane dropped to 150 feet, 120 feet, 90 feet, and especially 60 feet.....  You would want the victory and satisfaction of keep throwing that ball just like you previously did in hopes of continuing knocking over the pins, maybe even a strike....  With that said, I will be back on here later this week to keep you updated as our distance shortens and the forecast becomes a sure-fire strike!