Lot to talk about here... First off to see any of the images just click on them to see the full size version... the snow comparison is a huge picture in full resolution.  Secondly... The snow comparison is in millimeters, and the winds are in km/h.  So you may need to do a little math, but as a cheat sheet, 30mm=1 inch and 50km/h is a little more than 30 mph.  So let's begin.

The predicted path is still saying on course with what was expected... for the most part.  The European models have kept the storm further into the Atlantic and then dive inland. Their models only go into the future just as the snow would begin so they do not have a handle on snowfall totals just yet.  I feel it necessary to explain why the path of the storm plays a big part in rain vs snow.  The core of the hurricane will still be warm.  It will be bringing in the tropical warm temperatures and not being affected by the cold arctic are at its core....BUT the outer winds on the north side will be able to grab the Arctic are from Canada and pull them south.  So the western side of the storm will have much colder air.

In this image you can see the dashed 540 line.  A line used to help determine whether we see snow or rain.  As long as the track stays about 300 miles to the east of us (going through mid Pennsylvania) then that will mean more snow for us.  However you still have to be close to the core to get the moisture, so it is a fickle friend.  For snow, you want to be close, but not too close. On to our snow forecast. 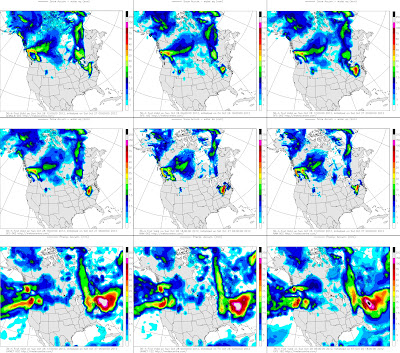 Feel free to click on the map for the larger view.  I compiled nine forecast maps of snowfall.  As you can see the models have a hard time with the snow totals and locations.  But it gives you an idea of where it appears most of the snow will be for now.  And again, we are still several days out...but it is bringing in the chance for snow earlier.  Right now it appears the chance for snow will be on Tuesday, not Wednesday(Halloween).  The snow will change over to rain for all of us, so the snow will not be sticking around.  Rain will quickly melt snow.  The reason we will switch to rain is because the low will pull north and then cut off our cold air from Canada.

Speaking of the cold air... it will be coming in strong.  Here is the forecasted winds for early Tuesday.  Winds will be 40+ miles per hour for parts of Ohio.  The chance for snow on the remaining leaves, and such strong winds means a chance for power outages a real possibility.   So very strong winds Tuesday and a chance for snow... just have to keep watching the models to see who gets the snow.

The rain we say early Saturday will taper off for the rest of Saturday.  More scattered showers Sunday and Monday as our cold front collides with the energy from Sandy moving up the coast. The winds will start picking up Monday and be at their max Tuesday.  The strong northerly winds will bring in cold enough air to allow for snow to fall to the surface early Tuesday.  The snowfall totals are still hard to pinpoint, but hope to nail that down more in 24 hours with more certainty, so be sure to check back in.  For anyone that cools off enough for the snow in Ohio, it will be heavy in spots, but brief.  Once the low moves north towards New York then it will cut off our cold air and we will switch back to rain.  For the far western parts of Ohio it may stay as rain because you will be too far from the low to get cold enough winds, but the track will determine the outcome... so again, stay tuned.  Lingering rain will stick around through Thursday... so temps will continue to fall for the next few days with scattered rain, if not snow, for the next six days.  I guess we are making up for all the beautiful weather last week.  Stay tuned and have a good one!