Meeting the President of Ohio State 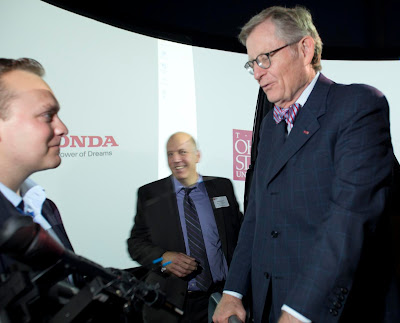 I always love any story I can do back on campus... but yesterday was an exceptionally awesome day.  In the morning assign meeting the driving simulator at Ohio State was having their Grand Opening yesterday.  Once I saw I was only 20 minutes from the start of the presentation I hit the road quick. 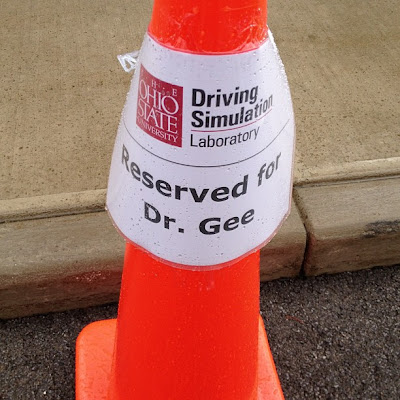 I was pulling up to the West Campus building and I see a spot right near the front...SWEET!  Nope, that spot was saved for President Gordon Gee.  I luckily spotted a spot two spots down from where the President of Ohio State would be parking.  I have never had the chance to meet him and talk with him like my brothers have, and I was a bit jealous.  Everyone always talks about how President Gee would visit dorms for lobby slumber parties, or show up to a house party off campus, or just randomly sit in a lecture hall, or visit a chemistry lab to make something blow up. 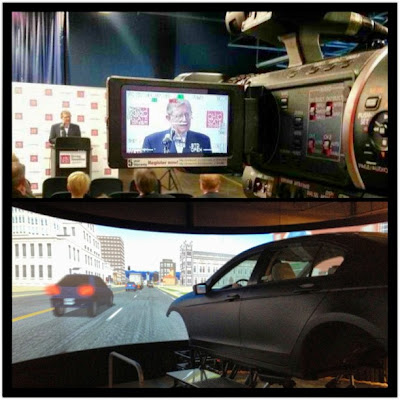 Before he left the simulation presentation, I coaxed one of the Honda representatives to talk President Gee into driving the simulator before he got back to his busy schedule.  It was like a kid driving a moped for the first time.  Nothing but smiles.  I clocked him at 88 miles an hour and asked him about it afterward and he just laughed and said the thought he had vertigo from going so fast.  We also chatted briefly about my career since I graduated Ohio State.  I told him I was a meteorologist in Lima, then Dayton, and now very excited to be back in Columbus.  He said that he thought he recognized me and asked if I do the weather on the weekends.  I told him I did and he finished the conversation by saying that he is very happy to know he can get his forecast from a Buckeye from now on.

I then finished doing my story and got to drive the simulator.  I had to drive it twice because since I was my own photographer... I didn't notice I double clicked the record button... so I had to run the simulation again.  Pretty cool how they will be able to test drivers reactions to real world situations in a controlled environment and make Honda and Acura cars even safer. 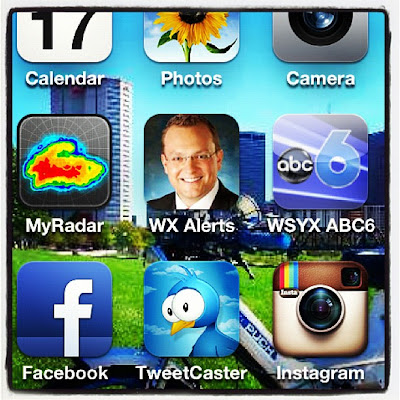 I have continued working on my weather alerts app.  If you have Twitter you can follow my work twitter account for any watches or warnings for central Ohio.  My work twitter is www.twitter.com/AndrewWSYX6.  If you happen to also have Tumblr then what you see in the picture is a link to my Tumblr page which will be the in-between for the advisories: www.AndrewWSYX6.tumblr.com.  I worked out the kinks and it should be good to go to feed the watches and warnings.  I may also add a few other heavily populated counties to the west, such as Montgomery, Hamilton, and Allen... which normally will be seeing the storms before they push into Central Ohio. 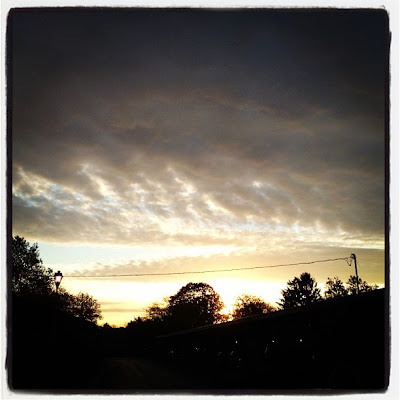 Today was a fairly nice day.  We saw a little sunshine today ahead of the rain.  I rode my moped down to campus to help a guy with his moped and sure enough it was a previous DAM Riders moped.  The carb was the same junk clone carb that was on there before that was extremely unreliable.  I advised him to by a quality carb and his issues with the bike running will likely be fixed.  He also needs to clean up the cable/lever situation because there seven different controls on the handlebars when you only need a max of 4.  I already hooked him up with someone who wanted to sell a carb so another bike will be on the road soon. 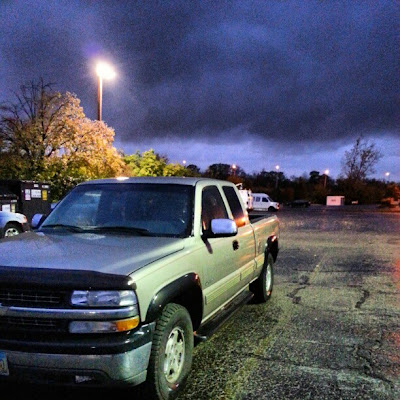 The sunny, dry start to the day quickly turned grey.  When I went out to my truck for dinner there were some pretty sweet low clouds rolling through.  The rain will be sticking around for most of the night so I guess I should consider myself lucky that I am not doing the high school football games tonight and filling in for Bill Kelly instead.

Speaking of the weather: The upper level low pressure system that has been bringing us the clouds and rain will slowly move eastward through Saturday.  Rain will be on and off through midday Saturday with the sunshine trying to peak through later in the day, while staying cool and breezy.  More sunshine for Sunday and Monday as temperatures begin to become more mild.  A weak system will bring a slight chance for rain Tuesday, but warm temperatures (70's) through the end of next week until a strong cold front approaches for Friday. Have a good one!