Sandy has started her turn inland and will make landfall this evening.  The East Coast is already getting battered, but it will make official landfall between 8PM and midnight tonight. 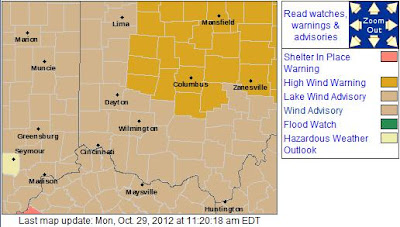 The storm will bring the Ohio Valley colder temperatures, wet weather, and high winds.  The central and northeast part of Ohio are under a High Wind Warning through Tuesday night with winds 30-40+ mph sustained winds and gusts 60+ likely.  The west and south part of Ohio are under a wind advisory with winds 20-30+ mph with gusts 50+ likely. The winds will likely lead to power outages, especially with how soft the ground is with the last 48 hours of rain.  The strongest winds will be late Monday through Tuesday and then by midweek it will only be breezy...but still wet, cold, breezy....raw.

Above is a forecast model for 2AM and you can see how tightly the blue lines (isobars) are packed.  That is a sign of VERY strong winds.  The wind barbs show winds between 20-40 knots for Ohio. 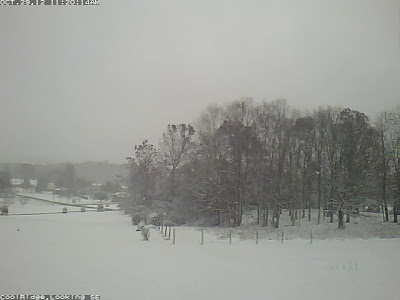 Now on to the snow.  The picture above is from a webcam in Cool Ridge, WV around noon. So the snow has already started to fly with this storm.  Below I have to forecast models of snowfall... I will give my thoughts on them... 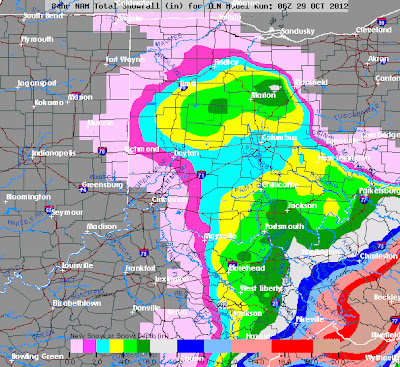 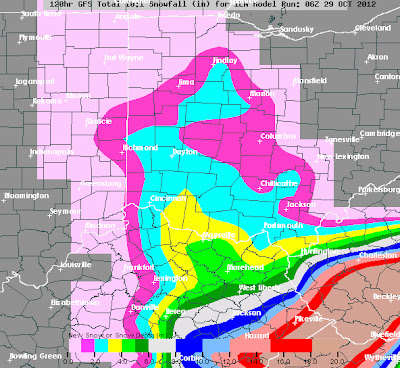 I think that averaging the two images would be a good idea of how much snow you will see.  The top image is the NAM model and is surprisingly forecasting MORE snow than the lower GFS model.  Historically the GFS will overdue the precipitation forecast.  One reason I think that the NAM went with so much snow is because it brings in the temperatures colder as little faster.

The switch over to snow or snow/rain mix will begin at different times depending on where you live and your elevation.  Places like Bellefontaine will see it switch first because they are higher in the atmosphere.  Between 8PM and 11PM most of it will have started to switch over tonight.  It will switch back to rain near daybreak.  I have said it a handful of times, but most of the snow will melt almost immediately.  The warm temperatures of the surface and wet surface will limit any accumulations.  If you happen to see a heavy snow shower it may stick around briefly, but once the switch to rain begins it will melt everything.  We stay as rain for the rest of the week and slightly warmer temperatures will not allow any more snow for the rest of the week.  Gotta run... going to be a long couple of days for me. Have a good one!

PS. Just got back from the store getting ready for being out in the elements for work...  Thought I would share... Stay safe out there(especially driving later)! 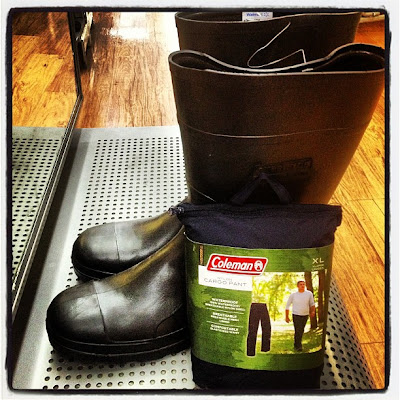 Posted by Andrew Buck Michael at 11:50 AM