So the 11AM update came out from the National Hurricane Center and the new track is making the turn northward about fifty miles further east... which will bring our chance for snow down, but not gone.  The latest track also has Sandy coming inland about 40 miles more north than my last entry.

According to the latest forecast models it looks like West Virginia will be getting the most snow along with Eastern Kentucky and the far Western tip of Virginia.  The higher elevation will help them greatly with that. 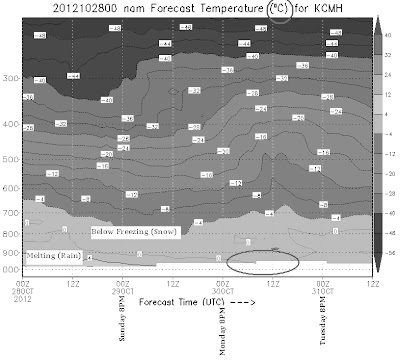 So this last image shows the freezing levels for the atmosphere.  It is worth mentioning that ALL rain starts as snow.  Even in the middle of summer all thunderstorms have snow, but the freezing level is so high in the atmosphere that it melts long before it makes it to the ground and the snow turns to rain.  So the last image shows how shallow the above freezing temps are.  The snow may be falling through such shallow warm temperatures that a flurry may be possible. Sunday night through Monday night before changing over to some snow for SOME people.

The rain this morning is still across eastern Ohio, but will push westward thanks to Sandy starting to flex her muscles and begin to move inland.  The rain will will mainly stay in Central and Eastern Ohio.  Folks that live closer to the Indiana/Ohio border may miss out on most of the action because they will be too far from the moisture from the storm.  The rain will continue through Monday night.  Between late Sunday night and midday Tuesday the freezing level will be about 2000 ft above the surface or less.  There is a chance for a few flurries mixed with the rain early Monday morning through Monday night because falling snow may not have enough time to melt.  This will change over to to a light snow mixed with rain at times for Monday night and Tuesday morning for some of Ohio.

The best chances to see a little snow will be Central Ohio, South Central Ohio, and Southeastern Ohio.  The far west will be too far away from the cold blast of air for much, if any, snow and the far eastern will be too close to the warm core of Sandy as she pushes into Pennsylvania for Monday night.  The far northern part of Ohio will not have the right timing for snow to form because by the time Sandy starts to move north we will have daytime heating on Tuesday making the temperatures too warm.

Most of the snow will melt almost immediately because the ground will be too warm and too wet to stick, but if it does fall fast enough in a few pockets it may stick to some surfaces for a short amount of time Monday night.  So be sure not to wake up Tuesday morning and get too excited...because you may be disappointed it will not be a winter wonderland.  HOWEVER, if you are up late Monday night or early Tuesday morning you may be treated to snow falling... but then melting.  As the temperatures warm Tuesday  morning the rain will melt any and all snow that may have stuck and then remain as rain through the end of the week with light hit or miss showers.

The big story for Ohio will be the winds.  The winds will continue to pick up day by day and winds will reach their max of 30-40+ mph Monday night into Tuesday with gusts even stronger.  You may want to check your trees now to see if there is anything you can do to help protect your house from losing electricity.  This has been a hard system to pinpoint because it all depends on the track of Sandy and I will continue to monitor the track with updates through the coming days so be sure to check back in for any shifts in the forecast times and locations that may see the snow.  Stay tuned and have a good one!