As far as the snowfall totals, it appears that Darke and Shelby counties had seen the most snow with some reports between 3-4" of snow. Most of the north saw about 2-3" and the rest of the Miami Valley saw about an inch...unless you lived to the far south where they only saw a dusting. So, my second blog entry yesterday afternoon held true. The snow started falling yesterday afternoon instead of the evening. Temperatures fell a little faster and this allowed the snow to start falling earlier than the evening hours. Hopefully this was a good first test for drivers to remind them of how to drive in snow. I say that, but little to no snow stuck to the road so I still think our next "sticking" snow will be the true driving test. 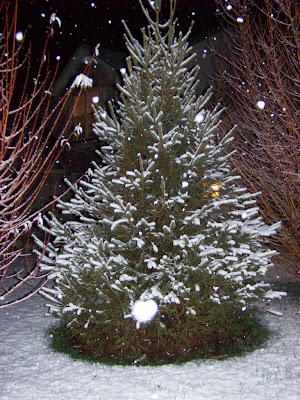 If anyone was on Twitter or Facebook and had a lot of friends around the Miami Valley, you would know it was snowing... EVERYONE was talking about our first measurable snowfall of the season. I had to get some sleep while it was at it's thickest depth in Dayton, but Dawn's cousin snapped the photo of the snow covered pine tree in Miamisburg last night...very seasonal. I was able to at least see the snow start falling before bed. Buckeye was not a fan of the snow...he loves being hot, not snow-covered. Most of the inch of snow we did see had melted before I left the house on my way to work... just a melting dusting on the lawn.

The snow is pulling out of here, but we may still see a flurry or two this morning. The clouds will give way to sunshine later today, but we will only get into the upper 30's. Tonight we will drop off to a low around 24. With clear skies, light winds, and PLENTY of moisture we may see a little fog Thursday morning. If we do see fog, it will likely be freezing fog so the roadways tomorrow may be worse than today, especially the bridges. They will freeze first because the wind will go under the bridge and cool them off much faster. We will stay dry and cool for the rest of the week. Rain returns Sunday and we could be dealing with a similar snowy situation on Monday. Next week is looking VERY cold after the system moves out Monday. I will keep you posted on the Sunday-Monday system in the coming days. Stay safe out there and have a good one! Also, Happy Birthday to my wife, Dawn.