Yesterday's storms were a bit of a letdown, but as a weather geek it was still a lot of fun. I was lucky enough to ride along with SWAT, Severe Weather Alert Team. I met up with the first vehicle in Arcanum. We then headed west to Indy.

Once we got to Indy we took a look at the situation and there was a nearly solid line of cells across Northern Illinois, Indiana, and Ohio. The most fuel for the thunderstorms was in Southern Ohio/Indiana and the maximum rotation in the atmosphere was in Central/Northern Indiana and Ohio. We were hoping to have a rogue cell pop-up to tap into this area, but all of the storms stayed in the line to the north and it slowly dropped south into the energy.

We geared up and headed north in both vehicles to monitor the approaching line of storms. Since it was a line they were all fighting together for the energy they shared the conditions feeding the storms. No cells popped up ahead of the line and hogged up all the energy and rotation. Another cause for the storms possibly did not develop as hoped was that the upper level winds in the atmosphere were screamingly strong. Had they been slightly weaker we could have had the showers ahead of the line become more developed.

Here are a few images to give you an idea of what happened yesterday. The line of storms was all fighting for the energy. 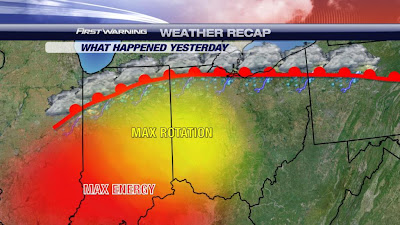 If we could have had one or two decent cells pop out ahead of the line we could have had a much different story, but instead we just dealt with the line of storms. We still saw a few strong storms with hail over an inch in diameter, but no tornadic storms in Indiana or Ohio. There was only one tornado in Illinois, earlier in the day. 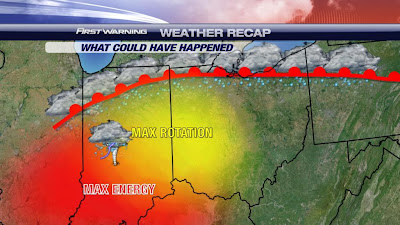 No storms today. We will see showers, mainly south of I-70 for today. The showers will pester the Southern part of the Miami Valley through tomorrow and then finally kick out of here. Cooler temps still on tap for later this week...dropping from upper 50's today, to 40's for the next couple days with lows below freezing Thursday and Friday morning. We will warm up a little for the weekend, but more rain by late Sunday and Monday. After only a little over three hours of sleep, I will now let you go. Grab me a coffee and have a good one!