Update on snow....upping the totals 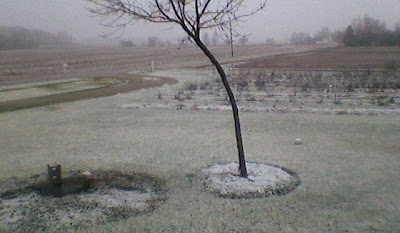 I have been keeping a close eye on the temperatures throughout the day and we have cooled off a little more and a little faster than the models were showing. So instead of the rain switching over to snow just before midnight we are already seeing snow here in the Miami Valley. The picture is taken by my brother in Darke County where they started switching over to snow around 3:30PM today. Since we will be cutting the rain short and seeing all snow sooner, here are my updated thoughts for tonight. To the far northwest 2-4" for Wayne, Randolph, Mercer, Darke, Auglaize, Shelby, and Miami Counties. For counties that border these counties, they can expect up to 2" of snow... such as Logan, Champaign, Montgomery, and Preble Counties. The rest of the Miami Valley will likely pick up about an inch of snow, or less to the south. Remember, the ground is still above freezing so it will stick for a short time and last the longest on the grass and mulch. The snow on pavement will melt fairly quickly unless you have a quick heavy snow shower. Parts of the area are under a Winter Weather Advisory meaning this is our first measurable snowfall for the season. While I doubt many of us will really need a snow shovel for this event... might not be a bad idea to find it in the garage if you live far northwest of Dayton. Heading to bed shortly so I can get into the weather center early tomorrow morning. Travel safe and as always, have a good one!