Before I begin this, I must say, what a difference 24 hours makes, I can hardly read my monitor due to the sun glare, so if there are misspellings, I apologize. Well I am sure no matter where you were Tuesday, the severe storms somehow affected you.  Even if you were at work, you probably stole a glimpse of the ominous sky or experienced the lights flickering if not go all the way out during the onslaught of the leading line of thunderstorms. The storms were moving in Indiana at 80 miles per hour at times, so there is no outrunning them, legally. The only way to "chase" them was to hunker down in the spot you think would be hit the hardest and wait for it to arrive.  Actually, as a matter of fact, the Miami Valley saw the storm in its peak and full maturity.  If you watch the radar loop from the entire morning, it developed in Indiana and die out once it left and entered Eastern Ohio.  So we saw the storm during its strongest stages.  That being said, we really managed to escape with minimal damage. I know some locations did see extensive damage, but considering that EVERY county, at least part of it, had a Tornado Warning, the damage was really isolated.

I was filling in for Jeff Booth Monday night and knew that Tuesday was going to be a hands-on day. I woke up a little earlier than expected, and sure enough the line was going to arrive about two hours before the models were showing.  I got ready and grabbed my chasing equipment and got to the station quickly.  We called in extra crews to position themselves along the line of storms as they approached.  After looking at the radar I was torn between two locations, either head south towards Oxford or north towards Greenville.  To give myself more time I just went west to decide further down the road.   Once I hit Gratis, I knew I was at my crossroads, either head north to Darke County, or towards Oxford.  After discussing things with the station and taking a look at the latest radar data, Darke County looked to be the worst hit.

It is quite the experience listening to the Twister Soundtrack while watching the storm rolling in to your left as I drove north.  I stopped to do a couple hits before the storm hit with my chasing gear.  I attached a few screen captures so you can see. Driving through Greenville was eerie with the tornado sirens blasted driving through town to get onto its north side. I stayed in Greenville when the storm hit and it only lasted a few minutes, but those minutes were intense. You can see from the video still frame that you could barely see anything and as quick as the windshield wipers worked, they still couldn't keep up.  I noticed a few limbs on power lines and called to report them, and with power out, I had to make a quick stop at a friend's office, Jason Aslinger, to get my radar updated and back on track.  While there, my parents called several times to tell me damage was pretty bad in Southern Darke County.

South I went and had our morning sports anchor Jon Scott come up and meet me with a live truck.  He met me and we did several reports during out wall-to-wall coverage of the severe storms.  On my parents road there were trees uprooted and tossed across the property, and the metal barn walls peeled off.  The worse damage was on Otterbein-Ithica Road.  Several large trees knocked into a home a half a mile of high voltage electric poles snapped liketoothpicks. My father, an Agricultural Meteorologist from Purdue University, saw rotation aloft in the storm as it approached, but that does not mean that it was close to the ground.  Regardless it caused a path of damage that lasted about three miles long.

Luckily it has all passed and now all we can do is cleanup.  Today will be mild with plenty of sunshine before Jack Frost arrives later this week.  I you and yours are safe and managed to escape the storms without a scratch, but in the end, no one in the Miami Valley lost their lives.  Enjoy the warmth and sunshine today and have a good one! 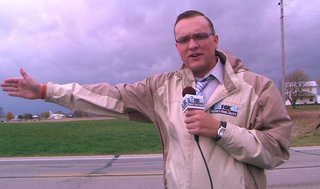 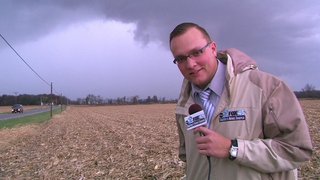 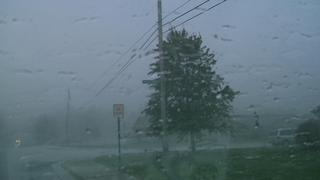 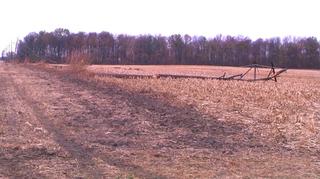 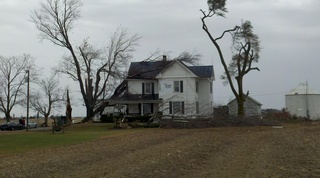